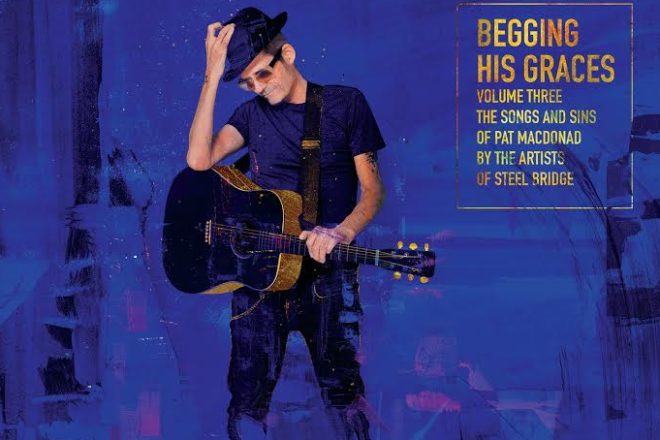 Dozens of artists of Steel Bridge Songfest will take the stage at Door Community Auditorium (DCA) in Fish Creek to pay tribute to Grammy-nominated, Sturgeon Bay-based songwriter pat mAcdonald July 29. In addition to a main stage performance of mAcdonald’s songs at 8 pm, there will be a pre-show courtyard concert and potluck in the DCA courtyard at 6 pm.

The pre-show courtyard concert features 12 songs by artists ranging from James Hall to Robin and Jenny Bienemann. Hot dogs, “not-dogs,” chips, sides, and beverages will be provided by DCA. Attendees are encouraged to bring a clearly marked dish to share. The pre-show concert is free to 8 pm ticketholders.

Singer, guitarist and songwriter pat mAcdonald grew up in Green Bay, gained fame in the duo Timbuk3 (known for their hit “The Future’s So Bright, I Gotta Wear Shades”), traveled the world as a musician, and now lives in Sturgeon Bay.

Joe Kaftan and Cathy Grier are producing the concert. Kaftan also initiated a CD tribute to mAcdonald. That project has now expanded into a eight-disc, three-volume set called Begging His Graces: The Songs and Sins of pat mAcdonald by the Artists of Steel Bridge Songfest. Begging His Graces will be available for sale at the July 29 concert.