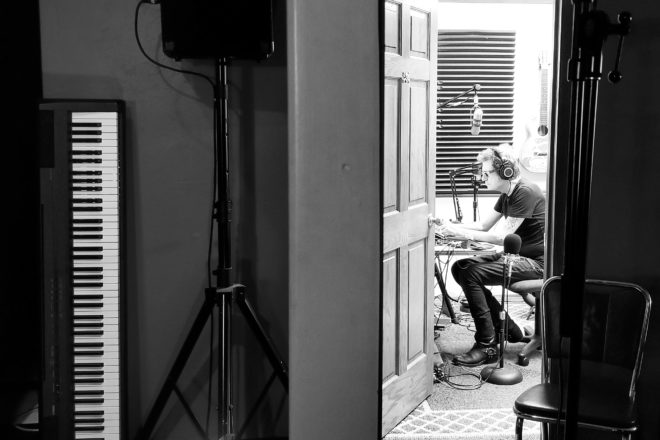 pat mAcdonald’s newest record, The Ragged Jagged Way Back Home, will be released on Jan. 23 at 3:33 pm on Steel Bridge Radio.

mAcdonald said of the record, “I made it from scratch last summer when, after a long dry spell, the first song fell upon me. I’d been building a little studio in a storage closet off the Tambourine Lounge, hoping to get inspired. The ‘Boom Clozet’ contained, among other things, my brother Bill’s beloved old Gibson, which I believe is inhabited by at least a fragment of his soul. Despite my recovering muscles, it was surprisingly easy to play. Having languished too long in dust, it begged to run circles around me like Bill did in life. This album sprang from that spirited gadget.”

mAcdonald continued, “Other tools I used were the ‘drone thing’ from Electro Faustus, a stripped-down Gibson SG (Bill’s other guitar), an Epiphone Sunburst … strung with all high strings (“Nashville tuning”), plus a few odd items.

“The arrangements are sparse, mostly vocals. No solos except for some little ear breaks — I tend to cater to people like me, who like to listen to albums yet have short attention spans. Consequently, this album will take less than half an hour of your time. If you think it’s too short, please listen again.”

Listeners can tune in to hear the album played in its entirety by downloading the free Steel Bridge Radio app or by listening online at SteelBridgeRadio.com.