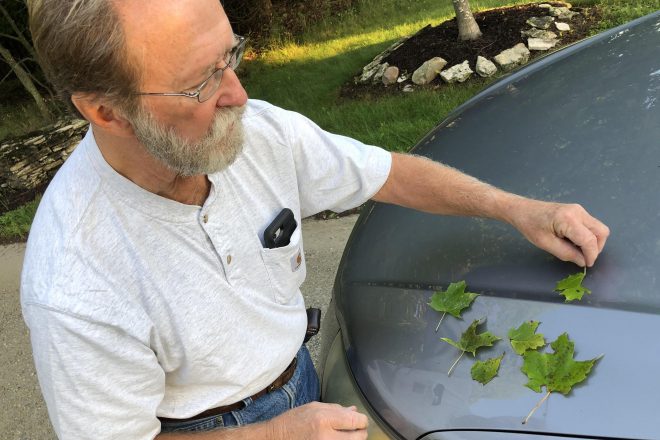 Some years, the native pest is worrisome but generally not lethal

Partially-eaten leaves falling from maple trees and a thinning of the tree canopy in rural West Jacksonport alarmed Tom Lutsey this summer.

The Waseda Farms patriarch and woodland steward noticed more sunlight than usual penetrating the woods along the lane to his house and saw leaves falling in late July. He then started checking neighboring properties. He noticed maples with fewer and smaller-than-normal leaves in some nonprofit conservation areas near Oak and Sunnyslope roads, and a neighbor on Bagnall Road west of County T had a patch of maples with only a few leaves on each branch.

Lutsey contacted district forester Jacob Schroeder from the Wisconsin Department of Natural Resources (DNR), and Schroeder identified the culprit — the saddled prominent caterpillar, a bright green caterpillar with a brown stripe or “saddle” on its back that’s native to the eastern United States.

“It’s rough to see, especially with all of the ash trees dying now and then to see maples get stripped,” Schroeder said.

Schroeder said the saddled prominent can defoliate maple trees in late summer after the tree has gained energy for three months and this year’s infestation is causing some “drastic” defoliation. But there is good news. While ash trees that fall prey to the invasive emerald ash borer don’t stand a chance, maple trees generally rebound once the saddled prominent population returns to normal within two-to-three years.

DNR Forest Health Specialist Bill McNee said the saddled prominent damages not only maples but beech and some other hardwoods. Trees already in decline from other afflictions might die from the late-summer defoliation in consecutive years, but otherwise rebound.

Saddled prominent infestations can do much damage, but because it’s temporary and usually not fatal, the DNR and U.S. Forest Service have bigger concerns about nonnative gypsy moths. The moths defoliate trees in spring and early summer, weakening them considerably. Schroeder said some areas south of Door County and a couple of locations in Southern Door had a growing presence of gypsy moths this year.

Meanwhile, Lutsey remains quite concerned about the rows of maples he planted about 20 years ago along his lane that don’t yet show any insect damage. Native stands of maple in the woods seem to have the most damage, he said. He can stand in the woods and watch green leaves fall and hear the pitter-patter of something else.

“The droppings from the sky from these caterpillars sound like rain in the woods almost,” Schroeder said.

Schroeder said he noticed some of the caterpillars in the Plum Bottom Road area northwest of Lutsey’s property last year, and some farther north near the Egg Harbor-Gibraltar town line. That would make this the second year of the outbreak according to his observations.

McNee said that property owners who have specific trees they want to save for certain may want to weigh the cost of chemical or airborne biological treatments versus the value of the trees. A saddled prominent infestation in north-central Door County also would have some temporary, adverse effect on maple syrup production, Schroeder said.