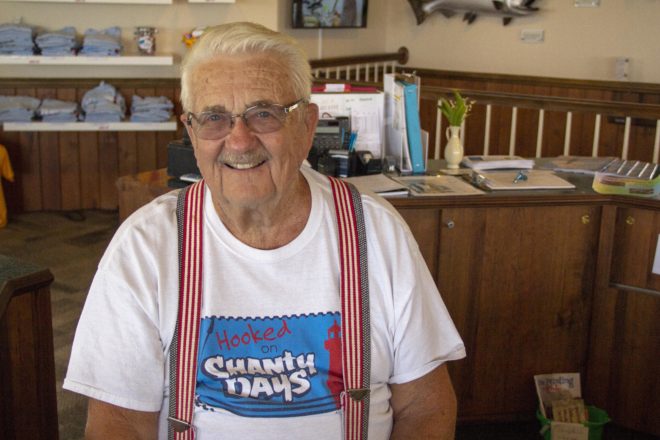 Paul Schmidt has spent more than a half century living in, working for and serving the city of Algoma. For his dedication and service to his community, he has been chosen as this year’s Shanty Day honoree.

In 1965 he began working for the city of Algoma street work crew. Schmidt worked for the city works for 38 years. Also in 1965, Schmidt began his work with the Algoma Fire Department, starting as firefighter, working his way up to Fire Chief, from which he retired in 2004.

Schmidt was also a charter member of the Algoma Jaycees Club in 1961. He has been an active member of St. John’s Church, teaching Sunday school, serving as superintendent of the Sunday school for more than 25 years, and was a chairman at the church for three terms.

Mayor Wayne Schmidt said, “The tradition of the Shanty Days Honoree is someone that gives back to the community, someone that’s involved, and has gone above and beyond, and I think that Paul fits that very well. He’s the type of individual that goes out of his way to help people.”

For his lifetime of service to the community, Schmidt will have a prominent part in the Shanty Days parade, and will be at the Mayor’s Honoree luncheon. The luncheon is held at Hotel Stebbins on Aug. 11 at 12 pm, where Schmidt will be given a key to the city of Algoma.