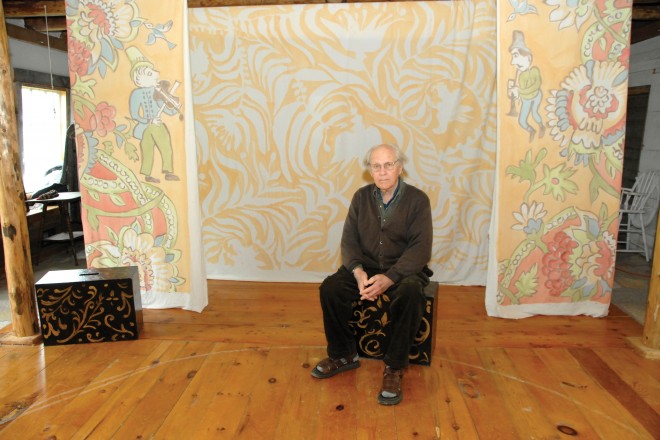 Paul Sills is quite possibly the most influential man in American theater that you have never heard of. Like so many successful people who have chosen to make Door County their home, Paul has had a long career of triumphs in the New York, Chicago, and Los Angeles theater scenes, and now focuses on sharing his unique vision with local actors and audiences here.

While the name Paul Sills might not be widely known outside of the theater community, you have no doubt heard of some of the products of his work. The Second City, Comedy Sportz, and even Saturday Night Live all sprang from the visionary philosophies of Paul Sills and his mother, Viola Spolin. Nearly every great actor working today has been influenced by the techniques they created.

At the root of Paul Sills’ work are theater games and improvisation, the belief in play as a method to free the actor so as to better communicate the story. Theater games come in many forms, and are now quite a common part of nearly all actors’ training. In them, the company of actors quite literally plays games together, some which resemble games that children might play, like tag, catch, follow the leader, or hide and seek. But theater games have a higher purpose:  to make the actors more comfortable and aware of their surroundings and each other, and to serve as a gateway to “playing” rather than “acting.” As Paul has been known to tell his players, “An amateur actor thinks they have it when they know their lines. But professional actors don’t really act – they play – and they bring the audience along.”

Paul’s work as a director and a teacher focuses on the use of improvisation and theater games to get the actor out of the head and into the body – that is, to remove any cerebral blocks and simply let the actor enter stage space. His stories are typically told without elaborate sets, with minimal or no props, and with a special focus on the words and the characters. An active imagination, on the part of both the actors and the audience, is all that is needed to bring the characters, and through them the stories, to life.

Paul’s lifelong work in improvisational theater stems from his mother’s initial development of theater games. Spolin began her work at the age of 18 when she was trained as a teacher by Neva Boyd at Hull House, the settlement house in Chicago founded by Jane Addams in 1889 to promote the cultural and social well being of the floods of immigrants arriving in Chicago. Boyd’s teachings focused on the use of play and the incorporation of the European traditions of games and folk dancing. In 1938, Neva Boyd gave Viola Spolin the job of teaching creative dramatics to children and adults at Hull House as part of the Works Progress Administration created by President Franklin D. Roosevelt. Spolin quickly discovered that the practice and discipline of play was a highly effective teaching tool that helped her solve the problems of theater. She also originated the use of improvisation – having the students in her classes take suggestions from the audience and play her theater games as a form of entertainment.

At a young age, Paul was brought by his mother to Hull House and incorporated into her theatrical companies. “My mother was a total genius,” Paul says. But it wasn’t long until Paul took what his mother had taught him and developed it into his own unique genius for teaching and directing. Eventually, Paul took the theater games of Viola Spolin and began working them into what he called “Story Theater.” In his youth, Viola had inspired Paul to read fairy tales and folk stories, which in 1966 Paul began to explore with his theater company playing theater games in the rehearsal of stories and then presenting those stories on stage. His goal from the very beginning was to create “a very simple and popular theater, something for the entire audience, including children – not an esoteric or coterie thing.” Even using the primary sources of folk stories, the rules of improvisation still applied. Paul once said, “Theater is concerned with reality…and reality can occur only with spontaneity.”

Paul enrolled in the University of Chicago in 1948 and founded some of the university’s first student-led theater groups by blending Viola’s techniques with established theater training. By 1955, Paul had co-founded the Compass Players, the nation’s first improvisational theater company. In 1959, Paul became the original director of Second City, which was an instant success. In 1965, Paul left Second City and with his mother started the Game Theater, in which members of the audience were welcome to participate in the performers’ improvisational games. It was at the Game Theater that Story Theater first emerged.

By the late 1960s, Paul and his wife Carol began coming to Door County with their three young daughters. Their primary home was Chicago, where they had helped found “The Parents School,” a school based on total parent involvement in their children’s education. The group began coming up to Door County in the winter to hold meetings and they were enchanted by the beauty of the landscapes and the old farmhouses. In the fall of 1970 they purchased one such farmhouse near Baileys Harbor, and Door County became their home for most of the year. “We were always here in the winter at first,” Carol explains, “and gone in the summers. It wasn’t until several years later that we discovered that Door County was a tourist destination!”

When they finally began spending summers on the Door Peninsula, Paul and Carol opened the Wisconsin Theater Game Center, which offers one-week improvisational theater workshops for actors and educators. The workshops take place during the summer in a studio created in the Sills’ barn.

By 1994, Paul and Carol were spending most of their time here in Door County, and began to share their unique brand of theater with local audiences and performers. They gathered a group of local players together and presented their first production in 1994, Paul’s own adaptation of the Charles Dickens’ story A Christmas Carol, at the Door Community Auditorium. This led to the creation of the Paul Sills Community Theater, an ensemble of core performers who annually produce story theater performances in the Door. This group includes local players Stuart Champeau, Jennifer Easton Erickson, Leif Erickson, Martha Garvey, Erik Frost, Rich Higdon, Valerie Murre Schlick, and Larry “Thor” Thoreson. Their productions always feature lively story theater versions of classics such as Ovid’s Metamorphoses, Dickens’ Cricket on the Hearth, Grahame’s Wind in the Willows, and Rilke’s Stories of God. Most recently, the group presented Dreams and other Stories by Anton Chekhov at the Ephraim Village Hall.

For their 2007 production, the players of the Paul Sills Community Theater are producing Paul Sills’ Story Theater in November at the Ephraim Village Hall. This show, a theatrical presentation of 10 different medieval legends and fairy tales collected by the Brothers Grimm, was originally produced to great acclaim on Broadway in 1970. Clive Barnes, who wrote a review of the show on opening night in 1970, said, “I adored the show, which brings back magic and innocence to Broadway, raises charades to the strange eminence of an art form, and demonstrates the essential theatricality of children’s games.” He went on to call the production, “Great, unequivocally great.”

For the lucky few people in this local group of performers, their experiences have been invaluable. “Paul is amazing,” Thor Thoreson, actor and owner of Gills Rock Stoneware in Ellison Bay explains. “He sees straight through to the heart of the story. Working with him has made me a better potter, a better businessman, a better human being.”

To those who have not studied theater, the theories and practice of story theater and theater games might sound a bit esoteric. But no matter how complex Paul’s ideas sound, their underpinnings are remarkably simple and their goals have always been clear. In a 1970 interview with Mel Gussow of the New York Times, Paul said, “I don’t think there is such a thing as Story Theater, just theater.” He described his work as “Seeing things that are invisible. It’s ways of speaking with your body.” Through the Paul Sills Community Theater, Paul continues to speak with the Door County community, telling stories as only he can tell them.