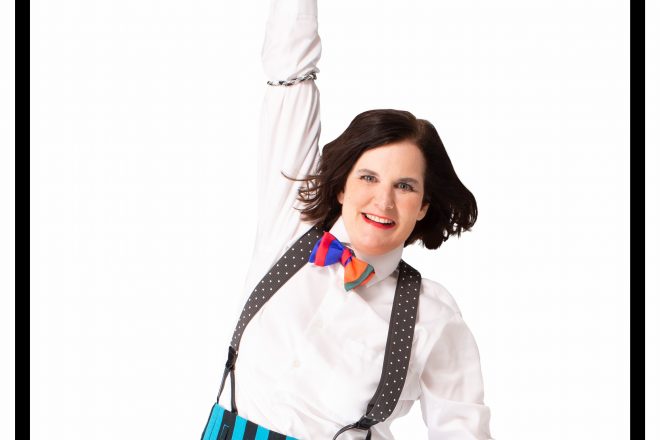 Comedian Jim Gaffigan told host Terry Gross the following during an episode of her radio show, Fresh Air: “I think standup comedy is this: It’s this kind of indulgence and narcissism.”

Standing on a stage in front of a room full of strangers and assuming they very much care to hear your thoughts could be viewed as a fairly self-centered endeavor. The comedy of humorist and author Paula Poundstone, however, stems not so much from believing the world wants to hear what she thinks, but from a place of conversation. Her live shows are built on a mixture of improvised discussions with the audience and comedic bits she’s prepared earlier.

“I have a lot of memory problems,” Poundstone said, “so I think that’s in part why I started talking to the audience – from stress [that] I would just blank out, and I would think, ‘Well, gotta say something!’”

She doesn’t prefer one style to the other, but instead, she finds a happy medium in combining the two.

“Knowing that I have some material that I can turn to is helpful scaffolding,” she said, “so if you try something and it doesn’t work, you have something to fall back on. The presence of one makes the possibility for the other.”

Maybe this conversational approach to her work positioned Poundstone to step behind the scenes earlier in her career. When she was asked to perform stand-up at the Emmys in 1992, she opted instead to do behind-the-scenes coverage. The same year, she reported on the Republican National Convention for Jay Leno’s Tonight Show.

Poundstone explained why the somewhat unusual segment, for the time, was such a hit: “What made it successful was that I knew so little. I don’t think I had ever even watched the convention before,” she said. “It was pre-MSNBC and pre-Fox, so we weren’t all awash in this [stuff] 24 hours a day. I think my naïveté and ignorance reflected that of a lot of the viewers.”

Her reporting for the Tonight Show blazed a trail for politically minded female comics, and in 1992, at the end of the George H.W. Bush presidency, Poundstone chalked up another first: She was the first woman to host the White House Correspondents Dinner.

In 1989, Poundstone had won an American Comedy Award for Best Comedy Club Stand-Up Comic/Female, and although she doesn’t like to belabor the point that she’s a female comic, she acknowledges that she’s faced challenges as a woman working in a male-dominated industry that she can see in retrospect but didn’t notice at the time.

“Sometimes when I’m talking about life as a comic, I hear from someone else about something they’ve been through, and I think, ‘Oh, yeah, there was that challenge. Oh, yeah,’ but at the time, I didn’t isolate that challenge over others,” Poundstone said. “The truth is when you first start out as a comic, you suck. You just do. And it takes a while to learn how to do it. Is that because you’re a woman? No! It’s because you suck.”

Poundstone certainly doesn’t suck now: Her HBO special Cats, Cops and Stuff was named one of the Five Funniest Stand-up Specials Ever in TIME magazine’s March 2020 “Best of” issue. She’s also released three specials for HBO and one for Bravo, and she spent much of the pandemic lockdown releasing RX Laughter videos on her website.

Poundstone originally thought that being off the road during the pandemic, with no live shows possible, would create leisure time – time to read more books and spend time with her many dogs – but she ended up being busier than ever.

“Every day I was writing or recording for one thing or the other,” she said. “I did a lot of stuff for charities when their galas couldn’t be live, so it was via Zoom. I also did my weekly podcast. I was horrible with the technology! If I never had to do another Zoom thing again, I would be pretty [darned] happy. I’m lucky that I have a terrific assistant who knows a lot about computers.”

Poundstone is comfortable on camera and has had great success with filmed comedy, but she speaks of the unparalleled enjoyment of being in a theater, performing to a live audience.

“Being in a live performance with an audience that you’re sitting among is such an uplifting experience,” she said. “I wouldn’t want to get rid of either experience [TV specials or live shows], but there’s something about the collective thing that is so extraordinary. You get caught up in that wave of whatever the emotion is, and it’s just different [from] watching stuff at home alone.”

Hear Paula Poundstone weekly as the host of the comedy podcast Nobody Listens to Paula Poundstone and as a regular panelist on NPR’s Wait Wait … Don’t Tell Me! Watch her perform live at Door Community Auditorium, 3926 Hwy 42 in Fish Creek, on Oct. 3, when she might even invite you to be a part of the show! Visit dcauditorium.org to purchase tickets.