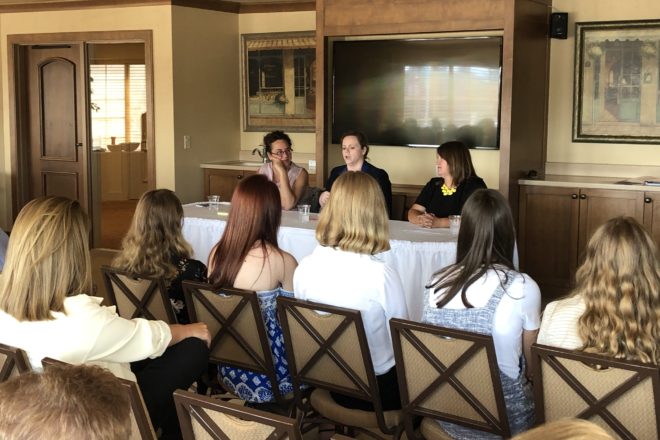 “Surround yourself with people that are going to champion you.” “Be your own advocate.” “Design your daily [life] so that you’re happy.” “You’ve been given you, so lean on that.”

These were all phrases I heard from the women who spoke during a panel discussion Aug. 7 at the Women’s Fund of Door County’s 10th annual Celebrate Women! luncheon. And as a young journalism professional, these remarks couldn’t have had better timing.

Sandra Martinez of Martinez Studio, Denise Stillman of Foremost Management Services and Stephanie Propsom of Fincantieri Bay Shipbuilding spoke about paving the way for themselves in their careers, and that’s at the top of my life’s to-do list. Their experiences come from drastically different arenas, but the sentiments they shared were similar: They all advanced in their careers by advocating for themselves in whatever way they could, creating relationships in the workplace, creating a circle of allies who would have their backs, communicating by listening to others, and sharing feedback, whether positive or negative.

Perhaps the most basic point – but one that’s often forgotten – is just to be nice to people.

Propsom, an attorney for Fincantieri Bay Shipbuilding, started her journey in the human-resources department, transferred to the finance department and ended up becoming an attorney and creating the company’s legal department. She worked hard at all that she did, and the company saw her as a valuable asset.

Denise Stillman of Foremost Management Services recalled when she and her husband began advancing their careers in Door County hospitality. Their path went from managing one hotel, to managing a few hotels, to starting a company. Then they bought their own hotel. Stillman said they never really questioned whether they could do it. They just did it. Surrounding themselves with strong people and being confident was paramount in their success.

When Sandra Martinez studied art at UW-Green Bay, most of her professors didn’t believe in her abstract style of drawing. They wrote her off as not being a serious artist because most people around her were interested in drawing realistically. But one professor encouraged her to stick with what she loved and to throw herself into it. By celebrating what made her different, she has made a living from her work for years.

These women made me want to clap and yell, “Yas, queen!” They made me excited to continue my work as a journalist, to advocate for myself and to surround myself with people who believe in what I’m doing. If I do that, maybe I’ll get to fulfill my dream of publishing a music magazine.

Or maybe I’ll follow my dream of becoming a full-time musician. (But I think I’ll just keep that one in my back pocket for now.)

In the end, it didn’t matter that the theme of the discussion was “Women Thriving in Door County Business.” I found what they had to say was still relevant to me. Relevant to women in careers outside of business. Relevant to men. To everyone.