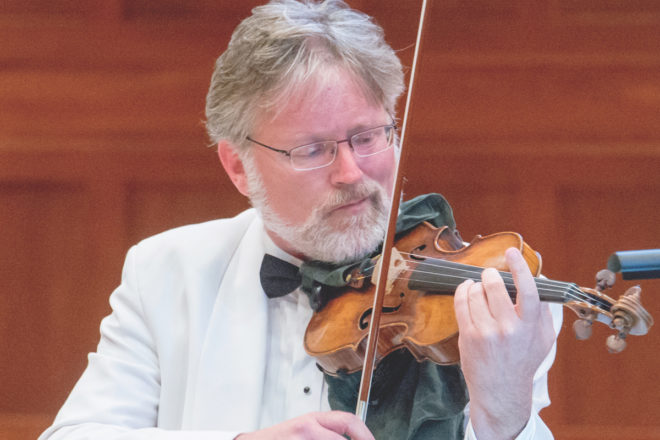 Midsummer’s Music is enormously grateful to David Perry for his many contributions throughout 20 years. Photo by Heidi Hodges.

During a private event in Ephraim on July 30, Midsummer’s Music celebrated 20 years of concerts with world-renowned violinist David Perry.

Artistic Director Jim Berkenstock gives great credit to Perry for the success of Midsummer’s Music: “When David Perry joined our ensemble as first violinist 20 years ago, it changed everything. His outstanding musicianship, leadership and devotion to Midsummer’s Music has been an extremely positive driving force in our success over the last two decades, and we celebrate and salute this wonderful anniversary with him enthusiastically and thank him for his great contribution.”

Perry first appeared as a special guest performer in the 1999 program “A Season of Solos.” The entire season lasted a mere 17 days. For the organization’s 10th-anniversary season in 2000, Perry returned as a permanent member of the group and quickly became an integral part of the musical family.

Midsummer’s Music is on a break but will resume Aug. 25 with Perry performing in each of the eight late-August and early-September concerts that culminate with the magnificent annual Labor Day benefit, featuring the Mendelssohn Octet, at Björklunden.

On Aug. 25, the season resumes with Profound Piano Quartets: Brahms’ Quartet in C Minor, No. 3, Op. 60; Schubert’s Adagio and Rondo Concertante in F Major, D. 487; and Robert Kahn’s Quartet in A Minor, No. 2, Op. 30. To see a complete concert schedule and buy tickets, visit midsummersmusic.com.