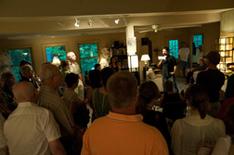 What do literature, jewelry, and pottery have in common? Seemingly nothing. However, “We’ve Hit Knock Bottom” blended the three artistic mediums seamlessly.

Luberger says, “It seemed like a very natural collaboration. We are all experimenting in our selected media – trying to do things differently. I think that energy is felt in all our work, so even though they are disparate, there is also a unity that somehow makes an event like ‘Knock Bottom’ work.”

For those who are unaware of Door County’s own Arts and Literature Journal, Knock, join the “Oh My Gosh – Where Have You Been My Entire Life Club.”

As a self-proclaimed literature junkie who has spent the last five years of her life (and a hefty sum of money) studying the great and not-so-great literature, I was saddened that I had yet to hear about Knock. 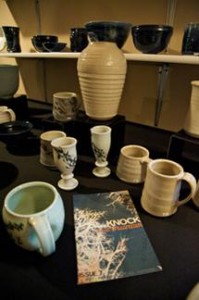 The idea for the journal came to Nik Garvoille, the founder, editor, and publisher of Knock, one winter when he was bored and unemployed. He says, “The idea of Knock just came from a need for an alternative outlet for artists and writers, as well as a creative outlet for me.”

One of Garvoille’s goals, he says, “was to empower local talent to share their work with a broader audience. I try to make Knock not intimidating, so people, who would usually not think about trying to get into galleries or publish their work, would have an outlet.”

While the journal is a “Door County thing,” Garvoille is getting inquiries from across the United States. He has no idea where these people are hearing about Knock, but needless to say, this is a good thing. Garvoille’s Knock is only advertised through local venues and a few social networks like Facebook, yet people all around are taking interest.

One such person was Luberger. At the launch event, he told a story about finding his first issue of Knock at Blue Horse Bistro in Fish Creek.

He says about Knock, “The words in the magazine initially took me by surprise. I rarely have encountered such honest emotion in printed form.”

In the back of every issue, Garvoille politely asks for sponsorships and donations to keep the magazine going, and Luberger was so impressed with the words in the magazine that he sent $10.

That $10 was just the beginning, and the collaboration between Luberger and Garvoille culminated in “We’ve Hit Knock Bottom.”

Luberger says, “Nik and I have been planning this event for a year and a half. Many, many hours and lots of collaborators made it possible such as my mother, Pamela Moore, who catered the event.” 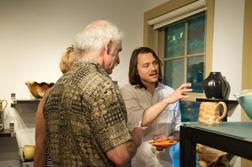 Luberger debuted 160 new pieces, both functional and sculptural. He worked on these pieces throughout the winter and spring of this year. He says, “I was working on new forms, glazes and did an experimental kiln firing to try to achieve some unique glaze surfaces on the work.”

The results, even to the novice eye, are exceptional and unique. Some pieces look almost fossilized, with sparkling crystals covering the surface, and a personal favorite was a blue mug with shelf-like surfaces resembling waves.

He says, “Lately my intuition has really taken the lead in my work. Letting the porcelain have a voice in the creative process has opened up quite a few new possibilities.”

As for what’s next for Luberger, he says, “I’m not exactly sure what creative path I am on, but I’m curious where it will lead.”

According to Lensch, the gemstones are where she draws her inspiration. She says, “It amazes me that all these stones come from the earth. I’m grateful to be a part of it.” 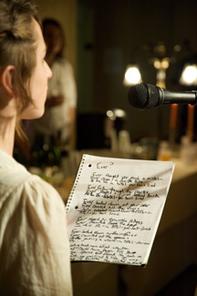 “Knock Bottom” was completely different. There were quite a few people ranging in age, delicious food and drink, lively readings, and a party like atmosphere. From the sounds of it, this is what Luberger wanted when he and Garvoille planned the event.

Luberger says, “I wanted folks to have a good time. It was really important to me not to have a stuffy gallery atmosphere. I also hoped to have a diverse audience in terms of age. It was really exciting listening to a 15-year-old read her poetry and seeing the reactions of an older generation and vice versa.”

Garvoille feels “Knock Bottom” was a success. He says, “The launch party was unexpectedly hugely attended, I thought. The audience was so attentive, and came with a lot of good feedback, questions, and interest…it evolved into a total success.”

When you get three artists together, passionate about what they do and supportive of one another, you end up with an event like “Knock Bottom,” celebrating all that art – both written and visual – is and should be.

Issues of Knock are available at most coffee shops and libraries throughout Door County.