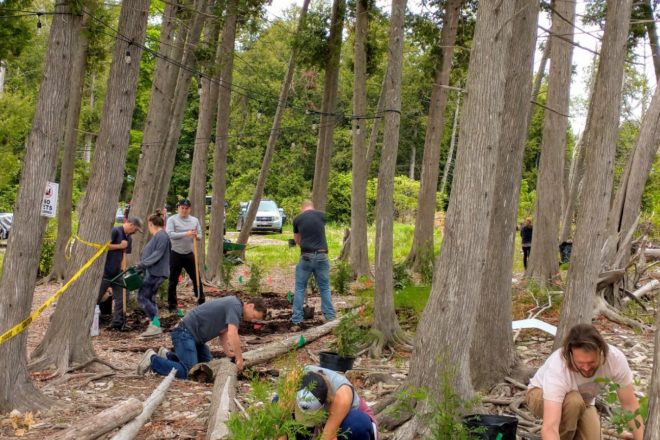 Volunteers plant trees near the beach.

The landscape of ridge swales inland from Pebble Beach was transformed after just a few hours. Garlic mustard was yanked from the ground, allowing native ferns and sarsaparilla to breathe. Red, yellow and green flags that dotted the property were swiftly replaced with young choke cherry trees, ninebark and white cedars. Many hands made for light work: Landscape contractors and volunteers hauled trash bags bursting with invasive plants out of the forest and planted 50-plus tree saplings in the stone-dense soil.

Removing invasive wildlife and planting native species are important steps to prepare the Pebble Beach property for public use. Conservation efforts will allow native Wisconsin plants to flourish, maintaining the environmental integrity of the shoreline and hiking trails.

Door County Land Trust partnered with the Village of Sister Bay to purchase the property from the Luber family under a conservation agreement. The deal closed in September 2019 for $2.4 million, with help from a National Oceanic and Atmospheric Administration grant to cover $1 million of the cost. The Land Trust hired Landscapes of Place to plan the environmental restoration of the 17 acres and 600 feet of shoreline.

“These are early infestations, so it’s good to stop them before they go through the whole preserve,” said Nancy Aten of Landscapes of Space.

Invasives not only disturb the environmental quality of a place, but they also deceive the average hiker, presenting an inaccurate image of original Wisconsin wildlife. Natives such as the Herb Robert geranium or baneberry can go unnoticed when tall, flowering invasives take over. “They draw your attention away from the beautiful native plants,” Aten said. “My hope is that removal of much of the invasive plant cover will reveal these beauties to visitors walking the ridge trail.”

Even the fragrant lily of the valley doesn’t belong in Wisconsin forests. Aten and Dan Collins of Landscapes of Place speculate that it spread to Pebble Beach from the nearby Little Sister Cemetery. Plant look-alikes can also deceive. For example, the invasive Dame’s rocket looks like phlox, but it grows taller and has only four petals instead of five.

Sister Bay Village Trustee Chad Kodanko is coordinating a Friends of Pebble Beach group to raise money and maintain the land. Plans for public access to the beach trail area include a parking lot for up to 20 cars, restrooms and amenities that are accessible to all.

“There’s a lot of great people in the community who want to make this work,” Kodanko said.

For the first two years of invasive-species control, the Land Trust has contracted Tom Hauser to remove woody invasives such as honeysuckle and buckthorn along the road, and herbaceous ones such as garlic mustard and hound’s tongue within the ridge swales.

“Our goal is to take care of the majority of it now so that going forward, it can be easily managed on a volunteer basis,” Hauser said.

The Land Trust plans to welcome volunteers again in the fall for more invasive-species removal and tree planting.

The main ridge trail forms a figure-eight shape, offering views of the water on one side and a deep forest swale on the other. Aten hopes to see informational trail signs added to describe the geological history of the 13 ridges.

According to Collins, the iconic smooth pebbles resulted from the beach’s location between two large limestone cliffs. Strong waves sculpted the stones, which were once sold as souvenirs for their beautiful shape. These waves also contributed to creating the steep ridges. Digging through the inland soil indicates immediately how the shoreline gradually receded hundreds of years ago: Stones sometimes nearly a foot long are lodged between tangles of tree roots.

“This is just a beautiful place that I’m so glad is conserved forever,” Aten said.