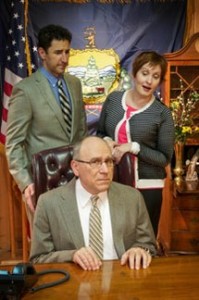 Peninsula Players Theatre opened its 80th season June 16 with the world premiere of the comedy A Real Lulu by Paul Slade Smith, with a three-week run closing July 5.

A Real Lulu follows Nervous Ned Newley as he receives a promotion amid a political scandal and his first day as the new Governor of Vermont is teetering on calamity. While media cameras await, can Ned or his aides pull him out of the fire and back into the governor’s seat?

A Real Lulu is directed by Players veteran Tom Mula, who directed last year’s world premiere of Sean Grennan’s The Tin Woman. “Paul has written a hilarious script about a good and competent man in the most terrifying, extreme situation: the attention of national media,” said Mula.

The cast of A Real Lulu features the Players Artistic Director Greg Vinkler as the newly appointed Governor, Ned Newly; Sean Fortunato as Dave Riley, Ned’s avid supporter; Erin Noel Grennan as Louise Peaks, a less than efficient assistant; Brad Armacost as Arthur Vance, a famous and boisterous political advisor; Katherine Keberlein as Paige, a proficient pollster; Linda Fortunato as Amy Summerfield, a regional reporter looking for her national news break; and Neil Friedman is A.C., her cool-under-pressure camera man. A Real Lulu is sponsored by Ken Raupach and the Wisconsin Arts Board.

The Peninsula Players perform Tuesdays through Saturdays at 8 pm and Sundays at 7:30 pm, except for July 5 at 4 pm. Individual tickets to A Real Lulu range from $36 – $42. For more information or to reserve tickets call 920.868.3287 or visit peninsulaplayers.com.