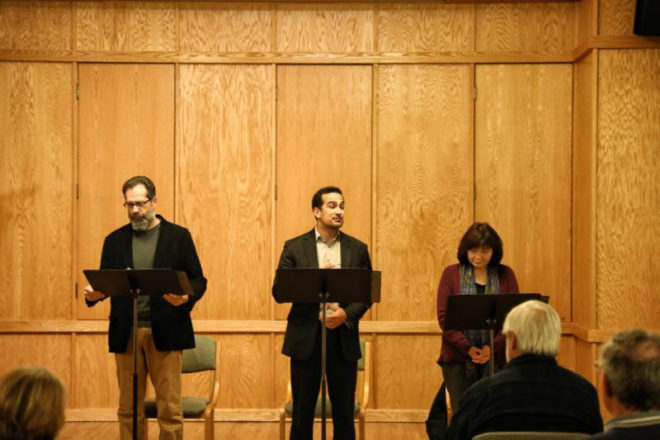 (Left to right) Rom Barkhordar, Demetrios E. Troy and Cheryl Hamada perform in Go Save Your Life by Nasir Bin Zakaria, as told to Laura Toffenetti, before a capacity crowd at Björklunden on Feb. 5. Photo by Brian Kelsey.

Go Save Your Life was produced with support and in coordination with Door County Reads and its exploration of The Latehomecomer: A Hmong Family Memoir by Kao Kalia Yang.

Go Save Your Life shares Bin Zakaria’s harrowing and inspiring journey as a Rohingya refugee from the jungles of Myanmar to his new home in Chicago. Toffenetti, a retired school teacher, and her husband, Steve Pringle, volunteer at the center and were inspired to share Bin Zakaria’s story.

This was the first of three readings of The Play’s the Thing, a winter series of play readings produced by Peninsula Players Theatre. Peninsula Players will host additional readings March 5 of A Trick of the Light, a new comedy by Peter Moore and April 2 of A Fine Bright Day Today by British playwright Philip Goulding.