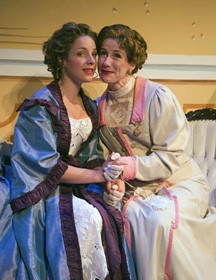 Jessie Mueller and Karen Janes Woditsch in the 2010 production of A Little Night Music at Peninsula Players. Mueller was recently nominated for a Tony Award in the category of leading actress in a musical.

Peninsula Players has season tickets available for a variety of shows – from new and classic comedies to a warm-hearted musical.

Patrons of the Players 2010 season saw Jessie Mueller in Over the Tavern and A Little Night Music. Members of the Players’ company are cheering for Mueller, who has been nominated for a Tony award in the category of leading actress in a musical for her portrayal of Carole King in Beautiful: The Carole King Musical.

Mueller made her Broadway debut in On a Clear Day You Can See Forever with Harry Connick, Jr. and was nominated for Best Performance by an Actress in a Featured Role in a Musical in 2012. What new talent will patrons discover this season at the Players?

The Peninsula Players perform Tuesdays through Saturdays at 8 pm and Sundays at 7:30 pm in the summer. With the opening of the fall show on Sept. 3, curtain times switch to Tuesday through Sundays at 7 pm. The closing performance of each show will have a 4 pm matinee. For more information or to reserve season tickets, call 920.868.3287 or visit peninsulaplayers.com/pages/SeasonSubscriber.html.