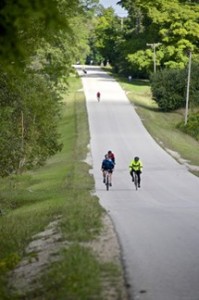 The appetite for cycling in Door County continues to grow.

“Some questioned why we wanted to host a second September century ride in Door County,” said organizer Brian Fitzgerald, “but cyclists have proven that they love riding in Door County, and that there are plenty of beautiful miles to explore on the peninsula.”

This year’s ride featured the first King of the Hills competition, in which riders competed in three timed climbs on some of the county’s most difficult cycling hills. Luca Fagundes of Egg Harbor and Mandy Hagman of Sturgeon Bay took the title, earning a prize package that included a one-night stay at the Birchwood Lodge, a King of the Hills jersey, a case of Tapuat Kombucha, and free entry to next year’s Peninsula Century Ride.

Organizers plan to expand the competition next year with more prizes and winners.

“We’re proud not only to put on a great ride, but also to showcase the restaurants of this village and their tremendous investment in a waterfront for everyone,” Fitzgerald said. “And we couldn’t do it without the full-fledged support of the Sister Bay Advancement Association and an amazing group of volunteers.”