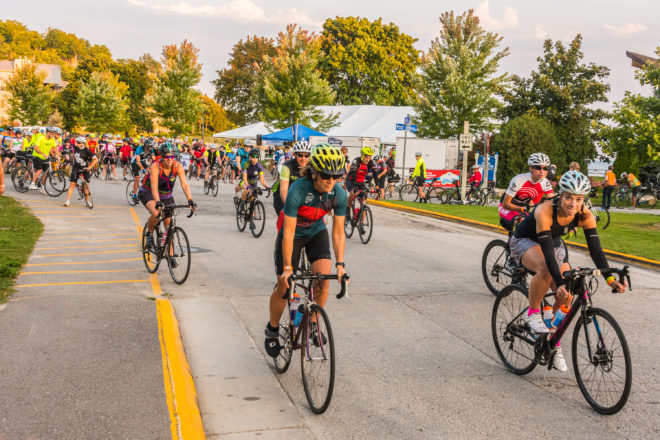 This weekend, 700 cyclists will hit the pavement for the annual Peninsula Century Fall Challenge ride. Participants will follow four routes, ranging from 25 to 100 miles, beginning in Sister Bay and riding along rustic roads and past the water vistas of the northern tip of the Door peninsula. On-site registration is still available at Waterfront Park. To learn more and browse route maps, visit peninsulacenturyfallchallenge.com.

For Residents and Visitors

Please be aware of increased numbers of cyclists on the roadways during this event. Bicycles are classified as vehicles under Wisconsin state law (WI Statute 346.02 (4)) and have the same rights and responsibilities as motor vehicles, including the right to use public roads unless specifically prohibited. The safety of bicycling depends on the conscientious efforts of both bicyclists and motorists to obey traffic laws and act with mutual consideration when sharing the roadway.

The organizers of the Peninsula Century Fall Challenge stress that all participants must follow the regular rules of cycling when participating in the event.

“When cyclists don’t follow the rules, it puts all cycling and silent-sports events at risk,” said ride director Brian Fitzgerald. “To continue to grow support for these and other events that share the public roadways, it’s crucial that cyclists ride safely, wisely and share the road with motorists.”

Although all four courses have been designed to avoid high-traffic areas, the routes will not be closed to traffic. All bikers should follow the rules of the road, including stopping at stop signs and riding single file on the right side of the road. All routes will follow regular state, county and local roadways that are also used by automobiles, trucks, buses, other bicycles, motorcycles and farm machinery; the routes have no special provisions for bicyclists. Those participating in the Peninsula Century Fall Challenge, using the map and the marked route, assume the responsibilities and risks for their own safety when cycling.