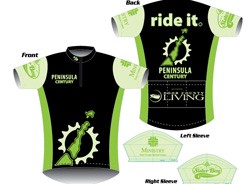 Sister Bay’s Waterfront Park will be a cycling haven Sept. 14.

That’s when the inaugural Peninsula Century Ride will welcome cyclists to the park for a challenging, picturesque ride in Northern Door.

Featuring routes of 25, 50, 62, and 100 miles, the Peninsula Century will take cyclists through some of the most beautiful routes on the peninsula’s northern tip.

The ride is organized by the Peninsula Pacers, the same team that runs the Door County Half Marathon and the Ride for Nature to benefit the Ridges Sanctuary.

“Ever since Sister Bay made the tremendous investment in its waterfront six years ago, I’ve wanted to create an event to showcase it,” says Pacers co-owner and ride director Brian Fitzgerald. “The Sister Bay Advancement Association has been tremendous in helping us put all the pieces in place to create a top quality event.”

The ride will begin with a mass 7 am rollout in Sister Bay for the 50, 62, and 100-mile riders as cyclists follow routes featuring six fully-stocked aid stations. Riders will finish at Waterfront Park to enjoy live music, food from local restaurants, homemade ice cream from the Door County Ice Cream Factory, and beer from Door County Brewery.

The ride is capped at just 1,200 cyclists, though Fitzgerald expects a few hundred in the first year. The cap, he says, is a commitment to the community to minimize traffic impact.

“They’re two different types of rides,” says Fitzgerald, who has taken part in the Door County Century many times. “What we envision long-term is the creation of a Door County Bike Week with several events book-ended by two great century rides. This is one of the great destinations for cycling in the Midwest, and we want a great showcase.”

To register, visit peninsulacentury.com or find them on Facebook.