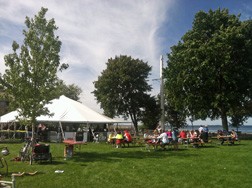 The weather couldn’t have been better and the post-ride food at Sister Bay’s picturesque Waterfront Park was extraordinary thanks to the support of a buffet of great Sister Bay restaurant sponsors.

“We couldn’t have asked for a better first year for the event,” said organizer Brian Fitzgerald. “The participants were fantastic and the sponsors put out a great food spread that truly impressed our visitors. And, well, it doesn’t hurt that Mother Nature couldn’t have been kinder to us.”

“Restaurants rose to the challenge and made fantastic food,” she said. “Volunteers of every age stepped up and helped make the event fun for the cyclists and for other volunteers. Next year is going to be even better, no doubt, and this is going to be a great boost for Sister Bay for years to come.”

While most enjoyed a great ride and a tough workout, one rider also brought us great inspiration. Matt Burress of Sister Bay brought in more than $3,000 for the Go Bo Foundation as he rode the century distance.

Burress was boosted by donations from several fellow riders as well as a matching donation from the Cordon Family Foundation.