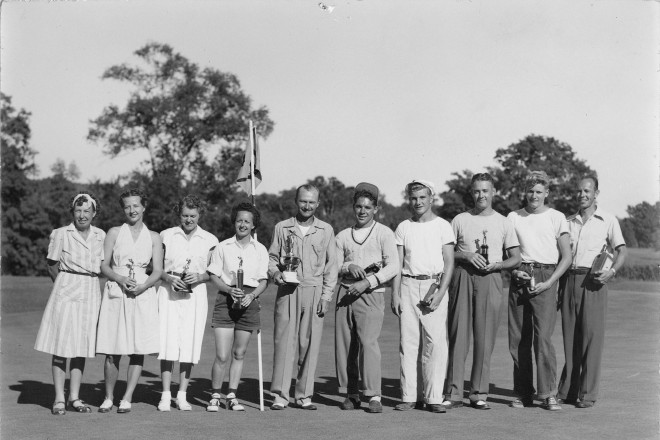 “A mystical place…” That is how the caretakers and staff of the Peninsula State Park Golf Course view the idyllic location where they find themselves working season after season. A paradise by anyone’s standard, the course is set within an unspoiled forest and surrounded by some of the most magnificent views of the county.

The Peninsula Golf Course has the distinction of being the only state-owned golf course in Wisconsin. That ownership guarantees some special perks, the natural surroundings of Peninsula State Park being the best one of all. Mynn Lanphier, who co-manages the 18-hole course clubhouse with her husband Paul Schloemilch, explains, “Golfing here is an experience with nature. It’s not uncommon to have eagles soaring over the course while golfers play.” There is a lot of other wildlife too: foxes, deer, turkeys, and even the occasional coyote. While we are heading towards the 11th hole, a little fawn not more than a couple of days old naps beneath the shade of a tree.

While Mynn and Paul supervise the running of the clubhouse in its particulars, Keith Nienow maintains the grounds as head greenskeeper. They are overseen by Tom Blackwood, the superintendent of the entire park. Tom’s involvement is an integral part of the course maintenance. A single tree, for example, does not get removed without Tom’s consent. Paul comments, “I believe Tom cares about the trees here like they were his children.” This protective attitude is also evident in Mynn, Paul, and Keith as well as the rest of the staff. The employee dedication is reflected in the small turnover. Chef Kristi Orsted is a perfect example; she has worked at the clubhouse restaurant for 35 years.

While being state owned has its benefits, such as not having the pressure of succumbing to development, it also has presented some challenges. One of the biggest challenges was trying to run the course on the budget that the state allowed. It was difficult to maintain the costly industry standard for equipment and grounds keeping. So in 1982, the PGA was formed. Not to be confused with the nationally-known Professional Golfers’ Association, the local PGA, or Peninsula Golf Associates, was established to help fund the needs of the course. This dedicated not-for-profit organization has been directly responsible for the dramatic improvement in the condition of the grounds, such as the state-of-the-art watering system.

The PGA, with a current membership of 150, is also responsible for the very popular youth programs. Sixty children each year participate in one of two four-day sessions. After going through the lessons, they are then encouraged to keep playing throughout the summer at Stonehedge Golf Course, with all their greens fees paid for by the PGA. The youth program is also supported by former participants who come back either as high school players or university players to help instruct. This year’s sessions will start June 26th and July 17th.

Along with a dedicated staff, there is also a very dedicated following of golfers who return to play at Peninsula as much as possible. This is especially apparent during the annual Resorter’s Tournament. This tournament began in 1925 and is considered to be one of the oldest consecutive match play golf tournaments in the country, if not the oldest. Started as an “end of season” event (back when everything used to close up after Labor Day), the tournament drew large crowds of spectators who would line the fairways to cheer their favorite players on. Generations of visitors have played in the event, some of them alongside each other.

Joe Thompson, from Urbana, Illinois, recalls how his family started playing in the tournament. “We were camping at the park in 1968 when my dad saw the sign promoting the event. He signed up and our family has been involved ever since.” Joe’s dad, Richard, won that year. Joe went on to win the tournament three times, his two brothers won a combined five times, and his son (also Richard) won the 2005 tournament. The Thompsons will be back to try to reclaim their championship status come August. They know that they will face some serious competition, such as Mike Gilliam of Green Bay (a 15-time champion), yet they are looking forward to the challenge. “It’s such an unbelievably classy event,” Joe enthuses. “One of the prizes I won in the tournament was a painted picture of the course done by a local artist. It is, by far, my favorite piece of art. Looking at it reminds me of all the great memories of Peninsula.”

Golfers, and maybe a couple of people here and there who are along just to drive the cart, obviously spend the majority of time on the course itself. Nevertheless, it is the clubhouse where everyone converges, people coming and going from early in the morning through the close of the day. Part restaurant, part pro shop, the clubhouse is unassuming, unpretentious and one of the best-kept secrets for dining with a view. Chef Kristi has a devoted fan club that comes in for her deep fried French toast for breakfast and burgers and BLTs for lunch. For those in the know, the clubhouse has also become a great place to order take-out. However, if you have a spare hour to look out over Eagle Harbor and an extra six bucks in your pocket, pick a window seat (they are all pretty much window seats) and prepare yourself for large portions of simple and delicious county cooking.

Once full, golfers wander over to the pro shop side of the clubhouse to see if there is any merchandise that might help improve their game. The right ball might make the difference or perhaps a new hat to shade the sun during play. The logo of the course’s golf wear is a totem pole, a representation of the 40-foot memorial pole located between the first and ninth fairways of the course. The memorial pole honors the Potawatomi, who were Door County’s earlier residents. Originally carved in 1927 by a Belgian artist named C. M. Lesaar, the pole was replaced by a laminated pine replica in 1970 by Adlai Hardin. The last Potawatomi Chief, Simon Khaquados, is buried near the pole, his grave marked by a large boulder.

For 85 years now, golfers have sought the peacefulness of the course, the breathtaking vistas and the chance to test their skills with a club. Most of those returning have a proprietary sense about the place. It is no surprise then to see the number of memorial benches and trees planted throughout; a perfect testimony to the history of the course and to the attachment that people feel for it.