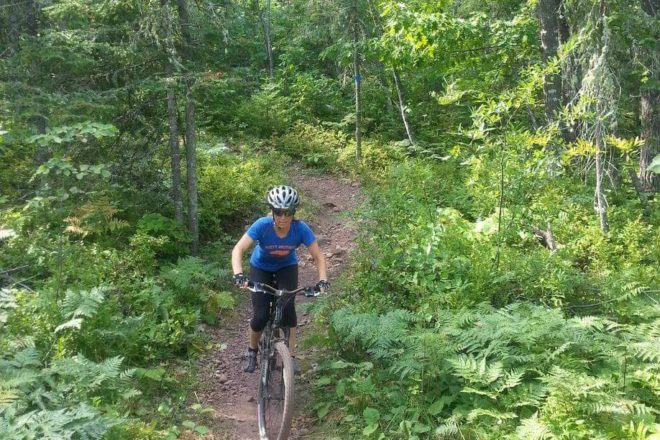 Door County mountain biking enthusiasts will soon have a new club to join. Peninsula Mountain Bike Club plans to launch this spring, bringing with it volunteers and big plans for the mountain bike trails within Peninsula State Park.

“The idea of doing a mountain bike club specific to Peninsula State Park came out of looking at the [cross-country] ski club and the role they play at the state park,” said Brian Fitzgerald, one of the club’s organizers.

Similar to the ski trails within Peninsula State Park, the mountain bike trails rely on a core group of volunteers to stay maintained. As that group of volunteers grew over the years, many of them started looking at ways to improve the existing trails and keep pace with the popularity and advances made within the sport of mountain biking.

“There hasn’t been much done to the mountain biking trails at Peninsula State Park since back in the 1990s,” Fitzgerald said. “We’ve had a core group of folks helping out with general maintenance and clearing, really working to maintain poorly built trails.”

The quality – and quantity – of the trails in Peninsula State Park could change very soon if the trail-system portion of the park’s recently revised master plan gets a green light from the state.

“We have some sections in the park that some people might call mountain biking single-track trails. But really, the mountain bike industry has evolved so much that if we’re going to have mountain bike trails, we want to make sure they are quality trails,” said Eric Hyde, park superintendent for Peninsula, Newport and Rock Island state parks.
What those mountain bike trails may look like, however, is still in the exploratory stage.

“There’s actually not a lot in the master plan, and we did that specifically because we know that to create desirable single-track trails, there is a need for professional design,” Hyde said.

Instead, the master plan identifies areas within the park that offer desirable topography for mountain bike trails, which would include a mix of machine-constructed trails and natural, low-impact trails.

“We’re looking for areas with varying topography and areas with elevation,” he explained, most of which lies within the interior portion of the park. “We’re not venturing out too much in the ledge area, although a lot of those areas do allow for silent-sport use, such as trails.”

Given the influx in riders during the past two years, which Fitzgerald attributes partially to the coronavirus pandemic, he said the need for this change is there.

“I saw more riders in the park last year than I’ve ever seen,” Fitzgerald said.

But more shocking to him was where the riders were from.

“It wasn’t so much tourists as it was people who had places up here, either living here or a seasonal place,” he said.

“The idea is to give these people a place to gather, to network through riding.”

It’s also a way for the park to maximize limited resources while continuing to offer optimal recreational opportunities for locals and visitors alike.

“Within the park, as a staff, we don’t have the time nor the knowledge of what proper mountain bike trail conditions are,” Hyde said.

The club will help not only with trail development and maintenance, but also with fundraising efforts to help move the plan from paper to the park.

“There are not really any other mountain bike trails in the area,” Hyde added. “Just knowing we already have that going for us at some level, and then being able to improve on it, would be a good complement to the activities the park already offers.”