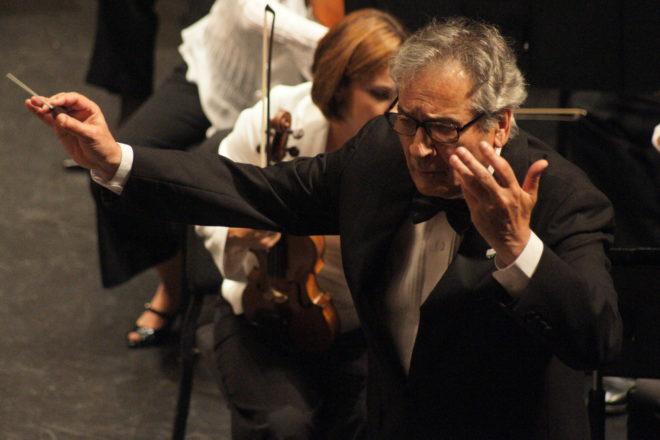 Even after 65 years of presenting concerts, it is possible to come up with new music and new ideas, even when it comes to “The Star-Spangled Banner.”

Numerous composers have arranged versions of “The Star-Spangled Banner” including John Williams, Igor Stravinsky and Rachmaninoff, to just name a few. Maestro Yampolsky has chosen to open the season with Otto-Werner Mueller’s version. The arrangement opens with a solo trumpet seeming to rise out of nowhere and then progresses with different phrases of the lyrics, until the full orchestra enters. Additionally, it is arranged in the key of C making it even more difficult to sing. The hope is that the audience will listen and reflect on the important lyrics of our National Anthem.

Opening night continues with a first performance of “Roman Carnival Overture” by Berlioz. This piece calls for four trumpets so Peter Everson, son of our principal trumpet Terry Everson (and festival violinist Lori Everson) will join us for this piece. Later in the week, Victor Huls, son of cellist Linda Minke, will also make his debut in our orchestra. It is exciting to the next generation beginning to make their appearances with the Peninsula Music Festival.

When Victor Yampolsky came to America, with the help of Leonard Bernstein, he secured his first orchestral job with the Boston Symphony, eventually becoming principal second violin. During this time, he performed with the Boston Pops at Tanglewood under the baton of Arthur Fiedler. The Aug. 5 concert will feature a traditional Arthur Fiedler Boston Pops concert for the first time at the festival. Principal trumpet Terry Everson, a current member of the Boston Pops, will be the featured soloist. Mr. Everson will play three pieces on the coronet in the style of 100 years ago at a salon concert.

Victor Yampolsky’s journey to America is a fascinating story that has been documented and is available to watch in a series of videos on the Peninsula Music Festival’s YouTube page. Go to YouTube.com and search for Peninsula Music Festival. You can also find videos of Maestro Yampolsky discussing all of the music being performed for the 65th season.

Twelve pieces being performed this season are first performances by the Peninsula Music Festival Orchestra including “Aureole” by Augusta Read Thomas. The piece was written by MS Thomas to precede a performance of Beethoven’s “Ninth Symphony.” Maestro Yampolsky chose it because the title, “Aureole,” can refer to a halo of concentric circles of light seen around a luminous body, especially around the sun or moon. With the solar eclipse taking place just two days after the close of the festival, it seemed to be an excellent time to add it to our season. Augusta Read Thomas will be in residence for the rehearsals and performance of her piece.

You can find details on all of the concerts, guest artists, visiting composers and other details on the Peninsula Music Festival website: musicfestival.com, including photos and biographies. All of the pieces having their first performance are notated with an asterisk. I look forward to welcoming all of you to our 65th season. If you’ve never attended, join us and you, too, can be one of our “firsts.”