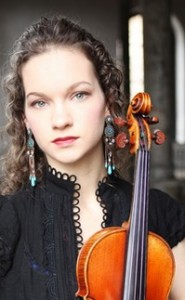 Aug. 25 at 6:30 pm, the Peninsula Music Festival (PMF) will celebrate the conclusion of another season bringing classical music to the Door Peninsula – their 60th to be exact.

The Festival Finale, conducted by Victor Yampolsky, will welcome the return of Hilary Hahn in her fourth festival appearance. The 31-year-old, Grammy Award-winner celebrated for her probing interpretations, technical brilliance, and spellbinding stage presence first performed at PMF in 1998 playing the Stravinsky Violin Concerto.

In the dozen years since she began recording, Hahn has released 12 feature albums, three DVDs, an Oscar-nominated movie soundtrack, an award-winning recording for children, and various compilations.

Featuring a repertoire as diverse as Bach, Stravinsky, Elgar, Beethoven, and others, Hahn’s previous recordings have received every critical prize in the international press and have met with equal popular success. All have spent weeks on Billboard’s Classical Top Ten list.

On DVD, Hahn first appeared in a live recording of Mozart’s Concerto 4 in Royal Albert Hall, in the millennial concert of the Last Night of the Proms in London in 2000. Six years later she was the subject of a full-length documentary, Hilary Hahn: A Portrait. In April 2007, she played Mozart’s Concerto 3 as soloist in Pope Benedict XVI’s 80th birthday celebration at the Vatican – an event subsequently released as a concert DVD by Deutsche Grammophon.

While primarily a classical musician, Hahn participates in a number of other projects and collaborations. In 2004, she was the violin soloist on James Newton Howard’s Oscar-nominated soundtrack to M. Night Shyamalan’s film The Village. Hahn also works frequently with folk-based singer/songwriter Josh Ritter.

An entertaining and avid writer, Hahn posts journal entries and information for young musicians and concertgoers on her website, http://www.hilaryhahn.com. Her violin case comments on life as a traveling companion on Twitter.

For her Door County concert, she will perform Prokofiev Violin Concerto No, 1, which was first heard at PMF in 1966 with Norman Paulu and Thor Johnson conducting and most recently in 2008 with Alyssa Park and Victor Yampolsky. It was also performed in 1993 by Frank Almond and Byron Hanson conducting.

Hahn’s program will open with the Barber Essay No. 2 and concludes with Shostakovich’s Symphony No. 5, heard in its only prior festival performance in 2003 with Victor Yampolsky conducting.

Peninsula Music Festival will also feature “Choral Concert” on Aug. 18. Pianist Antol Nel will perform for “Friends for Life” on Aug. 21 and “Russian Fest II” on Aug. 23 (which will be followed by a post-concert talk).

All concerts take place at the Door Community Auditorium in Fish Creek. For more information or to purchase tickets call 920.854.4060 or visit http://www.musicfestival.com.