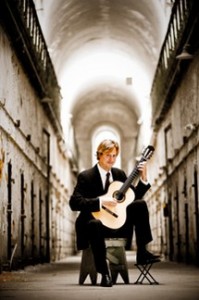 Guitarist Jason Vieaux will appear with the Peninsula Music Festival during their 59th season.

The 59th season of the Peninsula Music Festival (PMF) will feature a few firsts, including the music of Broadway and Hollywood, 6:30 pm concerts on Saturdays, and a Requiem.

The festival will open August 2 with the return of cellist Wendy Warner for her fourth performance and Maestro Victor Yampolsky on the podium for his 26th season. August 4 at 8 pm, Warner will perform the Saint Saens Cello Concerto #1, but prior to the show at 6:30 pm, Maestro Victor Yampolsky and Associate Conductor Stephen Alltop will discuss the music. Admission to the talk is $5.

August 6, the 6:30 pm concert will feature music from Broadway and Hollywood. Alltop has programmed a first half of the concert that features music from Great Love Stories, such as Bernstein’s Overture to West Side Story, with the second half highlighting the music of Heroes and Villains, including selections from Star Wars.

Week two of the festival will open with the annual Baroque and Classics Concert on August 9 at 8 pm, followed by the August 11 performance featuring members of the Festival Orchestra and soloists Tracy and Kristin Figard at 8 pm. Yampolsky and Alltop will discuss the music at 6:30 pm. Admission to the talk is $5.

Verdi’s Messa de Requiem will have its PMF debut on Saturday, August 13, 6:30 pm. The Apollo Chorus returns to the festival and joins with the PMF Chorus. Yampolsky and Alltop will discuss the music at 5 pm. Admission to the talk is $5. A boxed dinner may be pre-ordered for $10 for those attending the talk.

The final week of the season will begin August 16 at 8 pm with 18-year-old, 2011 Avery Fisher Career Grant winner, Caroline Goulding, who will make her PMF debut in the Tchaikovsky Violin Concerto. August 18 at 8 pm, pianist Inna Faliks will perform the Liszt First Piano Concerto in her festival debut, and the final concert of the festival will take place on August 20. The 6:30 pm concert will feature pianist Norman Krieger, who will perform the Brahms Second Piano Concerto in his PMF debut.

Tickets for each concert start at $30; students and children are $10. All concerts are held at the Door Community Auditorium. The Peninsula Music Festival administrative/box office is located in Ephraim at 3045 Cedar Street. For more information or to order tickets call 920.854.4060 or visit http://www.musicfestival.com.