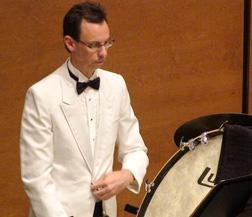 Christopher Norton, featured in this season’s Peninsula Music Festival, is a Professor of Music and Director of Percussion Studies at Belmont University in Nashville, Tennessee. While the primary duties of his current position focus on percussion, his 25 years of collegiate teaching have afforded opportunities to also teach graduate and undergraduate courses in orchestral studies, theory, and history. A recipient of several teaching honors and awards, he specializes in making connections between musical comprehension and performance.

As an orchestral percussionist, Norton performs regularly with the Nashville Symphony and the Peninsula Music Festival Orchestra. In the realm of chamber music, he is a founding member of ALIAS chamber ensemble and Sympatico percussion group.

As a solo performer and clinician, Norton has appeared at several Percussive Arts Society events including at their international conventions and state chapter Days of Percussion. He has given manifold recitals and clinics at various universities, conservatories, and summer festivals in North America and Europe.

Alongside Norton’s percussion activities are those as a conductor. He is currently Music Director and Conductor of the Nashville Philharmonic Orchestra. He served in a similar capacity many orchestras across the nation.

Beyond these experiences, Norton credits the educational benefits of performing for 30 years as a percussionist in professional orchestras under a wide array of conductors.

For more information about the Peninsula Music Festival, call 920.854.4060 or visit http://www.musicfestival.com.

The Peninsula Music Festival (PMF) is committed to the presentation of excellent performances by a professional symphony orchestra and the enhancement of music appreciation and education in Door County, Wisconsin.