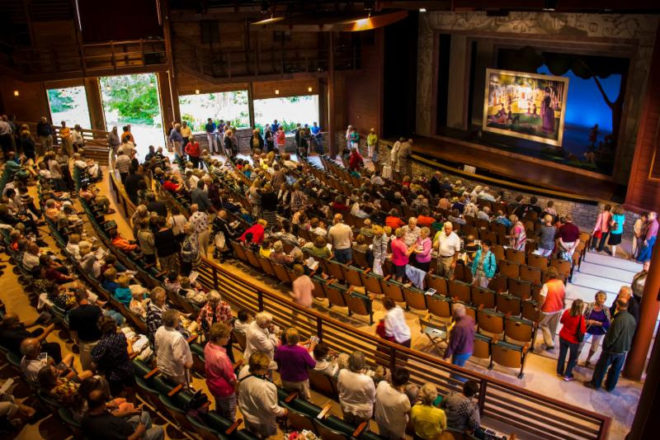 “On the heels of having successfully completed our 82nd season, I’m very happy to announce next year’s 2018 season,” said Artistic Director Greg Vinkler. “People sometimes ask me if I plan seasons around a theme. The answer is no, I don’t. The only things that connect these shows are variety and entertainment – plus they’re all shows about which I care a great deal. And I find that feeling that way about a slate of shows makes my job and everyone else’s much easier and much more fun!”

Now and Then (June 12-July 1) opens the season. This is the third premiere of a Sean Grennan play on the Pen Players stage. The play is set in an Irish neighborhood bar in 1981. A couple is offered money to sit and listen to a stranger’s story. “It’s a story of romance, aspirations and life, told with a huge amount of love and humor,” said Vinkler.

Miss Holmes, a new play by Christopher M. Walsh, will be performed July 4 – 22. It is based on characters by Sir Arthur Conan Doyle. In this murder mystery with a twist, Walsh’s Sherlock Holmes and Doctor Watson are intelligent, independent woman in 19th-century England.

The Drowsy Chaperone, a delightfully smart and merry Jazz Age musical with show-stopping song and dance numbers, will be performed July 25 – Aug. 12. Vinkler said, “The show begins with the houselights down. A man in a chair appears on stage and puts on his favorite record: the cast recording of a fictitious 1928 musical.” The Drowsy Chaperone is the winner of five Tony Awards, including Best Book and Best Original Score, and seven Drama Desk Awards.

Living on Love, a new romantic comedy by two-time Tony Award winner Joe DiPietro, is on stage Aug. 15 – Sept. 2. Living On Love is set in a glorious Manhattan penthouse in 1957, which is home to a high-strung and long-married couple, a prominent opera soprano and a tempestuous conductor. Vinkler said, “The music-infused plot line is silly and fun, and the set and costumes will be gorgeous.”

Salvage, an intriguing drama by Joseph Zettelmaier, is the final show of the season, on stage Sept. 5 to Oct. 14. Vinkler said, “I told Joe I didn’t know how to characterize Salvage and said I guess I would call it a romantic-comedy-mystery-drama, and he laughed and said that’s exactly how he has described it himself to others.”

More information on the 2018 season will be forthcoming in the new year. The creative teams and casts will be selected from regional talent pools and will be announced at a later date. Ticket sales for the 2018 season begin in January. For more information, visit peninsulaplayers.com or call 920.868.3287.