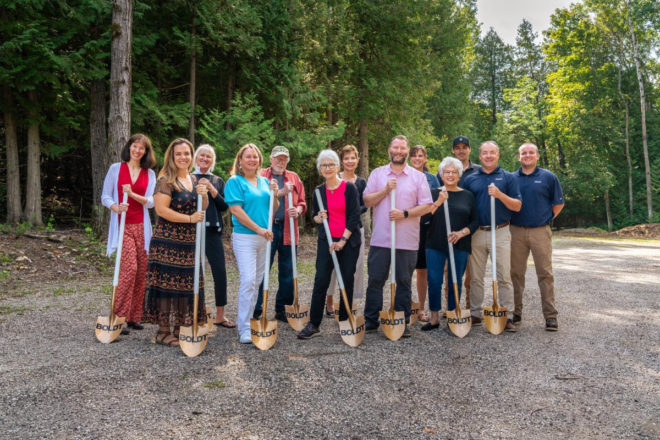 Peninsula Players Theatre broke ground Sept. 8 on two new dormitories to house its interns and staff members. It’s a successful result of the Act II: Protecting the Past, Ensuring the Future capital campaign, which the theater company launched on the opening night of its 87th season in June.

“We are thrilled to break ground on this critical project,” said managing director Brian Kelsey. “New intern and staff housing has been a long-awaited goal of ours. It is remarkable to finally witness this historic moment.”

The Boldt Company began to clear the area to make way for two new dormitories to replace the aged, insufficient structures in which company members currently reside. The company will also replace the mobile outdoor shower trailer that currently functions as the main bathroom facility for those who live in these structures. Modern amenities such as indoor plumbing and climate control will help to attract the next generation of theater-makers to Peninsula Players Theatre.

The projected completion date for the new dormitories is May 1, 2023 – just in time to house next year’s interns and staff members.

Learn more and contribute to the housing campaign at peninsulaplayers.com, or contact Danielle Szmanda at 920.868.3287 or [email protected]