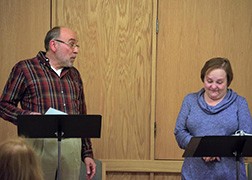 Chapatti focuses on the meeting and relationship of Betty, a divorcee and caregiver to 19 cats, and Dan, a widower with a dog named Chapatti. This funny and gentle story centers on these two lonely animal lovers who rediscover the need for human companionship.

Participating in the play reading were Peninsula Players Artistic Director Greg Vinkler and Penny Slusher, who starred in the world premiere of Chapatti at Northlight Theater in Skokie, Illinois.

Peninsula Players will host its final winter play readings at Björklunden April 6 at 7 pm with two yet-to-be-published one-acts. I Shall Love you Forever by Kathleen Thompson and Waiting for Tina Meyer by Kristine Thatcher and Larry Shue.

Call the Peninsula Players at 920.868.3287 for information on the reading. Admission is free, general seating available.