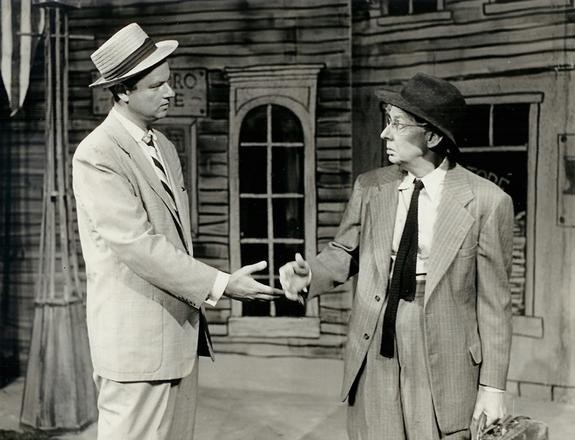 Thompson (right) with Harvey Korman in the 1957 production of “Inherit the Wind.” Photo courtesy of Peninsula Players.

Actor influenced generations in the theater

One of the icons of Door County theater died Tuesday, June 15. Bob Thompson, who began his long and distinguished career at Peninsula Players in 1938, was 93.

“He embodied so much of what Peninsula Players is all about: professionalism, the development of young theatre talent and a deep commitment to Door County,” said Players Development Director Alan Kopischke. “He will be sadly missed.”

“I have probably learned more about acting from him than anyone I know,” said Vinkler. “On stage, in whatever he did here, he had audiences in the palm of his hand – and they loved it.”

Thompson performed at the theater in 1938 and 1939, when Peninsula Players was the only entertainment in town and an audience of 150 people was considered a great crowd. He graduated from Goodman Theatre School at the Art Institute of Chicago in 1939 and moved to New York City to pursue his career there until the Second World War altered his path.

He served five years in the Army Air Corps during the war. It was during the war that he met Margaret Porter through letters. They married in 1946, and she remained by his side until the end.

Caroline Fisher, one of the theater’s founders, lured him back to the Players to serve as resident actor-director in 1953. In addition to his decades of acclaimed work at Peninsula Players, Thompson performed on Broadway and around the country, including every summer stock theater in the Chicago area. In a lengthy career that included appearances in over 300 plays, he worked with stars including Joe E. Brown, Mickey Rooney, Betty Grable, Robert Wagner, and Janet Gaynor. He was a three-time winner of Chicago’s prestigious Joseph Jefferson Award for Acting.

A great character actor, his son Don said “he knew how to give stage, not take stage. A lesson he passed on to me as well.”

Robert Edward Thompson was born in Kansas City in 1916, eventually settling in Downers Grove, IL in 1934, which he called home for 70 years. He taught at Rosary College, now Dominican University, from 1946 – 1973. In the summers of 1946 – 1949 he earned his Masters in Theater from the University of Michigan. In 2003 he and Margaret moved to Sister Bay and entrenched themselves in the peninsula arts community. He loved to travel and the outdoors, speaking with pride into his final days of achieving the rank of Eagle Scout in his youth. 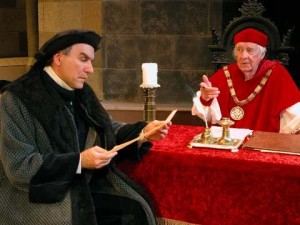 Actress Jean Sincere played Thompson’s wife on stage often and worked with him in what he called “some of my favorite plays,” in his 2003 memoir An Actor’s Life: It’s Better Than Selling Shoes! Those included Painting Churches, Foxfire, Da, and On Golden Pond. Sincere said he’ll be greatly missed and fondly remembered in the Players’ community.

“It’s hard to believe that he won’t be there this summer,” Sincere said from her home in California. “Bob stood for fabulous acting, and he stood for an awful lot of pranks both on stage and off. I always loved working with him.”

Sincere was with the troupe at the start and had hoped to make it back to Door County this summer for the theater’s 75th anniversary, in part to see her old friend one last time.

“Thompson was passionate about all things theater, but especially the Players,” she said. “Door County meant a tremendous amount to him.”

Thompson last acted on the Players stage in 2003 as Cardinal Wolsey in A Man For All Seasons.

“As long as I can still totter around the stage, I’ll be happy acting up until the very end,” he wrote in his memoir.