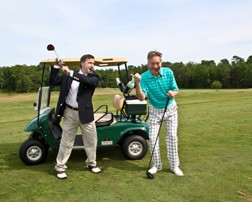 Lee E. Ernst (left) and Tim Monsion portray Henry and Dickie, CEOs of rival country clubs, in Ken Ludwig’s The Fox on the Fairway on stage at Peninsula Players Theatre-in-a-Garden through Sept. 4.

Ken Ludwig’s madcap golfing comedy The Fox on the Fairway made its Midwest première at Peninsula Players Theatre-in-a-Garden Aug. 17, the start of a three-week run.

The Fox on the Fairway is a charming screwball adventure about love, life, and man’s eternal love affair with…golf. Two rival country clubs, Quail Valley and Crouching Squirrel, prepare for their annual grudge match. A massive private wager is made between the two CEOs just before the best player switches teams. Filled with mistaken romance, dreadful attire, emotional mulligans and silly shenanigans, The Fox on the Fairway is a “tour-de-course” of rapid-fire chip shots and frenzied miscommunications.

Director Linda Fortunato will lead the cast through the water hazards and sand traps of this new comedy. Fortunato is making her directorial debut at the Players but has many stage credits with the company as an actor and choreographer.

The Peninsula Players perform Tuesdays through Saturdays at 8 pm and Sundays at 7:30 pm with the closing 4 pm matinee performance Sunday, Sept. 4. Discount tickets are available for groups of 15 or more. Individual ticket prices range from $32 to $38. There are no performances on Mondays. For more information or to reserve tickets phone the Peninsula Players box office at 920.868.3287 or visit http://www.peninsulaplayers.com.