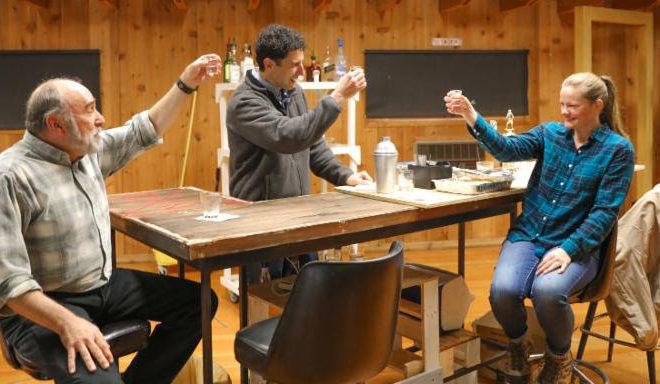 (Left to right) Actors Greg Vinkler, Sean Fortunato and Eria Elam share a toast while rehearsing for the world première of Now and Then by Sean Grennan. Photo by Brian Kelsey.

Peninsula Players Theatre opened its 83rd season June 12 with the world première of Now and Then by Sean Grennan, a new comedy-drama that is performing through July 1. This touching, funny and unbelievable story centers on Jamie, an aspiring pianist, his girlfriend Abby and a mysterious older gentleman who offers them $1,000 each to talk with him for an hour. Their ensuing conversation changes their lives.

“It is, at the end, very much a love story,” said playwright Sean Grennan. “It kind of asks us what is love worth in our lives? What is it worth going through for love? Are we destined to be with certain people?”

Grennan found a new artistic home at Peninsula Players when his shows Making God Laugh (2011) and The Tin Woman (2014) made their world premieres. Both have gone on to have very full lives elsewhere.

Peninsula Players veteran actor and director Tom Mula directed both of Grennan’s premières and once again helms the director’s chair for Now and Then. Peninsula Players’ Artistic Director Greg Vinkler is cast as the older gentleman, and performs alongside Pen Players veterans Erica Elam, Sean Fortunato and Barbara Robertson.

A post-show discussion with Grennan is scheduled for June 15. For more information and to buy tickets visit peninsulaplayers.com.