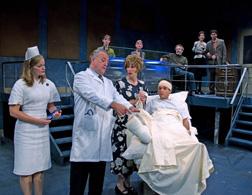 For a half-price ticket discount on Friday, September 3, attendees are welcome to share their favorite joke with the box office staff. This offer is only valid for walk-up sales, not previously ordered tickets, phone, or Internet orders.

Comic Potential tells the story of Jacie, a robot actor cast in “Hospital Hearts” who develops a glitch for comedy. The scriptwriter Adam sees it as a gift, so when Jacie is threatened to be scrapped, he kidnaps her and a real life adventure begins.

Comic Potential will be on stage through September 5. Curtain times are Tuesdays through Saturdays at 8 pm and Sundays at 7:30 pm, except the closing performance September 5 at 4 pm. Group and individual tickets are available. Individual ticket prices range from $29 to $36.

For more information or to reserve tickets, call 920.868.3287 or visit website http://www.peninsulaplayers.com.