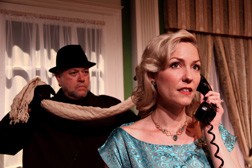 (Left to right) Neil Freidman and Katherine Keberlein in “Dial M for Murder.”

Peninsula Players Theatre continues its 80th season July 8 – 26 when it presents the classic suspense-filled thriller, Dial M for Murder by Frederick Knott. Dial M for Murder was first staged on Broadway in 1952 and Knott adapted the script for Alfred Hitchcock’s 1954 classic film.

Tony, a former professional tennis player, has grown accustomed to the lavish lifestyle made possible by his heiress wife, Margot. Convinced Margot is having an affair, Tony, rather than play victim to her waning affections, begins to plot her demise.

Between cocktails a game of cat and mouse, laced with blackmail and intrigue, begins. When Tony’s precise plans go awry he must improvise an equally deadly plan and stay one step ahead of the police.

Dial M for Murder has been translated into 24 languages and the play has been produced in more than 30 countries. As tension vigorously mounts alongside Tony’s tenacity to get away with murder, all while he exudes great charm and charisma. The continuous and sinister game Tony plays with his wife, college classmate and the seemingly disinterested Scotland Yard detective, keeps audiences spellbound.