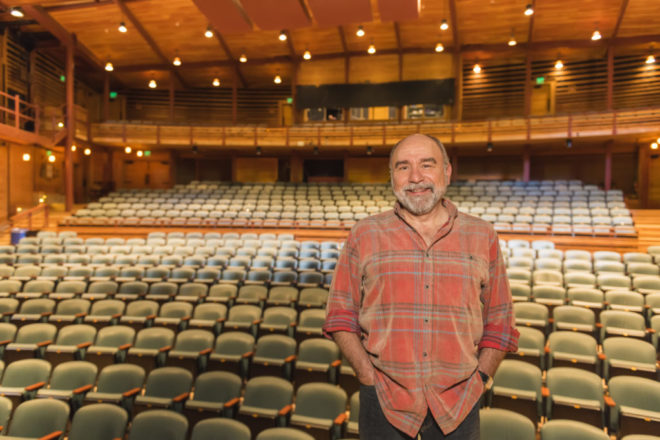 Andrew Kleidon recently sat down with Greg Vinkler, Peninsula Players Theatre’s artistic director, on the Door County Pulse Podcast to talk about projects the Players embarked on in 2020, why in-person seasons look different at professional theaters this year, and what people can expect from Peninsula Players’ 2021 season.

Andrew Kleidon (AK): What projects were the Players able to embark on in 2020 when theaters were closed?

Greg Vinkler (GV): As many theaters across the country were doing, we wanted to keep a presence out there – to remind people that we were still here – so we did a lot of online content. Two of the big projects were, starting in June, I started doing interviews once a week, through Zoom, with, at first, Peninsula Players alumni. That was June to mid-October, which would have been our season. That was a lot of fun to catch up with those people.

When those ended, we went to interviews about the history of the Peninsula Players with Audra Baakari Boyle, our business manager, because the Players has a long history, from 1935 to, I think this is our 86th year. It’s a long time. It was wonderful. The local historical societies helped us with material and images.

On top of that, the other project we were involved with was doing audio play readings. We have a winter play-reading series called The Play’s the Thing that we do at Björklunden, which, of course, last winter we couldn’t do.

I started working with Kevin Christopher Fox, an actor and director who started the Chicago Radio Theater, and through Zoom we did a series of six audio play readings, and that was incredibly fun because it was the closest thing we could get to performing.

AK: During a year when live performances were impossible, how do we define theater?

GV: My feeling was that filming something, or doing a play by Zoom, was not theater. It’s really more akin to filmwork. Film is a whole different medium and requires a whole different set of skills that are very different from live theater, so the idea of doing audio play readings seemed to be the closest to what we did as The Play’s the Thing. To me, one of the most amazing things about live theater, that I love, is [that] theatrical magic can be very simple, and it engages the audience in that moment.

AK: Can you explain why things will look different this year at the Players?

GV: It’s my belief that for us to call ourselves a professional theater, we need to employ the best people we can, and that invariably involves people who are members of the union. Not just the actors’ union, but the designers’ union, and the stage directors’ and choreographers’ union, and all three of them, besides the state and the federal government, all have something to say about what we can do.

The union’s stance is on the safety of its members. We’re a fully vaccinated company, and we’re unique in that we’re not just a theater, but we feed everybody, so we’re a restaurant and a bar; and we’re a hotel because we house everyone; and we’re a nature preserve.

Fortunately, as the pandemic has gone on and people have gotten vaccinated, things have eased up. For example, right now, one of the things Equity requires is that the audience is at least 10 feet from the actors, and that is to protect the actors.

GV: We decided to do a couple shows; we’ll run them four weeks each; they will not overlap; and the other consideration was [that] we need to keep the company as small as possible because we will continue to do safe-distance seating.

We went through a lot of plays, and we ended up deciding on Talley’s Folly by Lanford Wilson, which is a two-character play, which will include Sean and Linda Fortunato. It’s an intermission-less show, and it’s a lovely, lyrical play. I just watched a run-through of it yesterday, and they got me at the end – I was crying. It’s beautiful.

For the other show, I thought a romantic comedy would be really nice. As people were returning to the theater this year, I think they needed something uplifting, hopeful, positive. That was really important to me. I came across a play called Romance in D by Jim Sherman. It’s a very, very sweet show about apartment neighbors and their parents.

AK: Small casts aren’t new to the Players, but do you feel like you’re compromising at all this year?

GV: My feeling is that the audiences that come will see what we’ve been doing for many, many seasons. We’re going to make it as beautiful, and professional, and full as possible. The experience basically will be the same.

We weren’t sure earlier, but now we know that the beer garden can be open, and the bar, and the canteen. One of the sad things about this year is that we won’t have any interns, and they are the backbone of our operation. In a regular season where we have five shows, we could not produce without them.

AK: This is your final year as artistic director at the Players. What’s your greatest takeaway?

GV: It’s been a huge, huge part of my life. It has given me so much, in so many ways. My goal was to make it the best possible theater it could be, and of course building the new theater in 2006 changed the game.

It’s been my privilege to work for the theater and to carry on a tradition since 1935. We did those history videos, and I realized that what we are today is kind of what Caroline and Richard Fisher started in 1935, and I’m very proud of that. I’m very happy to have been part of the fabric of that place over time.

Listen to the full interview with Greg Vinkler on the Door County Pulse Podcast.