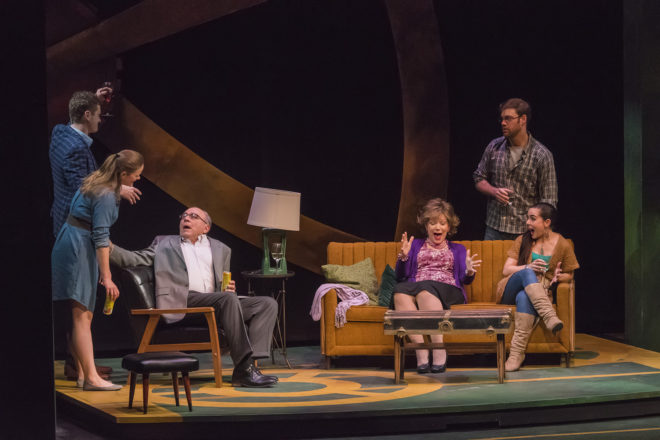 Playwright Steven Peterson was inspired to write a shocking romantic-comedy-drama when he first learned of the “gender reveal” trend of expectant parents eager to learn and share the gender of their baby in creative ways. The reveal often involves the revelation of pink or blue elements: frosting via cake cutting, balloons hidden in a box, or colored silly string shot from cans. In some cases, the couple has their doctor seal a document containing the gender to be read at a later date.

“I had never heard of that before and I thought it was hilarious,” Peterson recalled. “The idea popped in my mind: what if you had some announcement at the baby shower that was a surprise but not at all the kind of surprise that anyone would expect?”

The Chicago playwright began developing the idea into a 10-page comic scene that marked the conception of The Actuary, now on stage in its world premiere run at Peninsula Players Theatre. 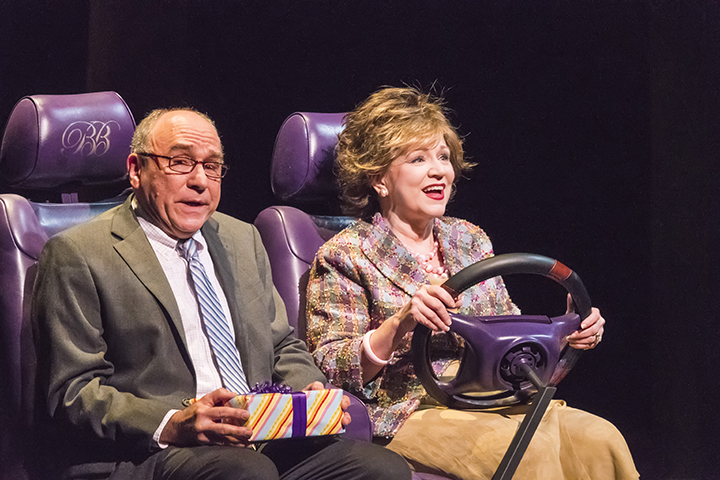 Greg Vinkler and Judy Blue as Ed and Barb Brooks in ‘The Actuary.’ Photo by Len Villano.

This romantic comedy follows actuary and self-described “most boring man in the world” Ed Brooks (played by Peninsula Players artistic director Greg Vinkler) as he reflects on the chaotic and, to the audience, humorous situations from the previous days, weeks and months that led him to the present moment. Those reflections guide the audience into the defining scene of the story, with Ed and his enthusiastic, cosmetics sales leader wife Barb (played by Judy Blue) attending the baby shower of their daughter Tabitha (Erica Elam) and her husband Lyle (Matt Holzfeind). Also attending the party are Tabitha and Lyle’s friends Richard and Avery (Kyle Hatley and Emma Rosenthal), who are recently engaged.

The highlight of the party is the “Baby Shower Bombshell,” a sealed envelope Ed brings to the party that will reveal whether their grandchild will be a boy or girl. What the envelope contains is a bigger bombshell than any of the guests had anticipated, leading to Ed’s reverse narration of the nine months leading up to the shower to better explain how the family got to this point.

What those nine months reveal is the predicaments faced by lifelong friends, and lovers young and old – young adults dealing with ambition, trust and attraction juxtaposed against a longtime married couple in their sunset years and a father willing to do anything to help his daughter find happiness.

All of this, Peterson explained, “plays out against the background of what it means to be family.” Peterson drew on “pure playwright’s instinct” to craft The Actuary in reverse, an endeavor he admits led to some headaches at the writing table. 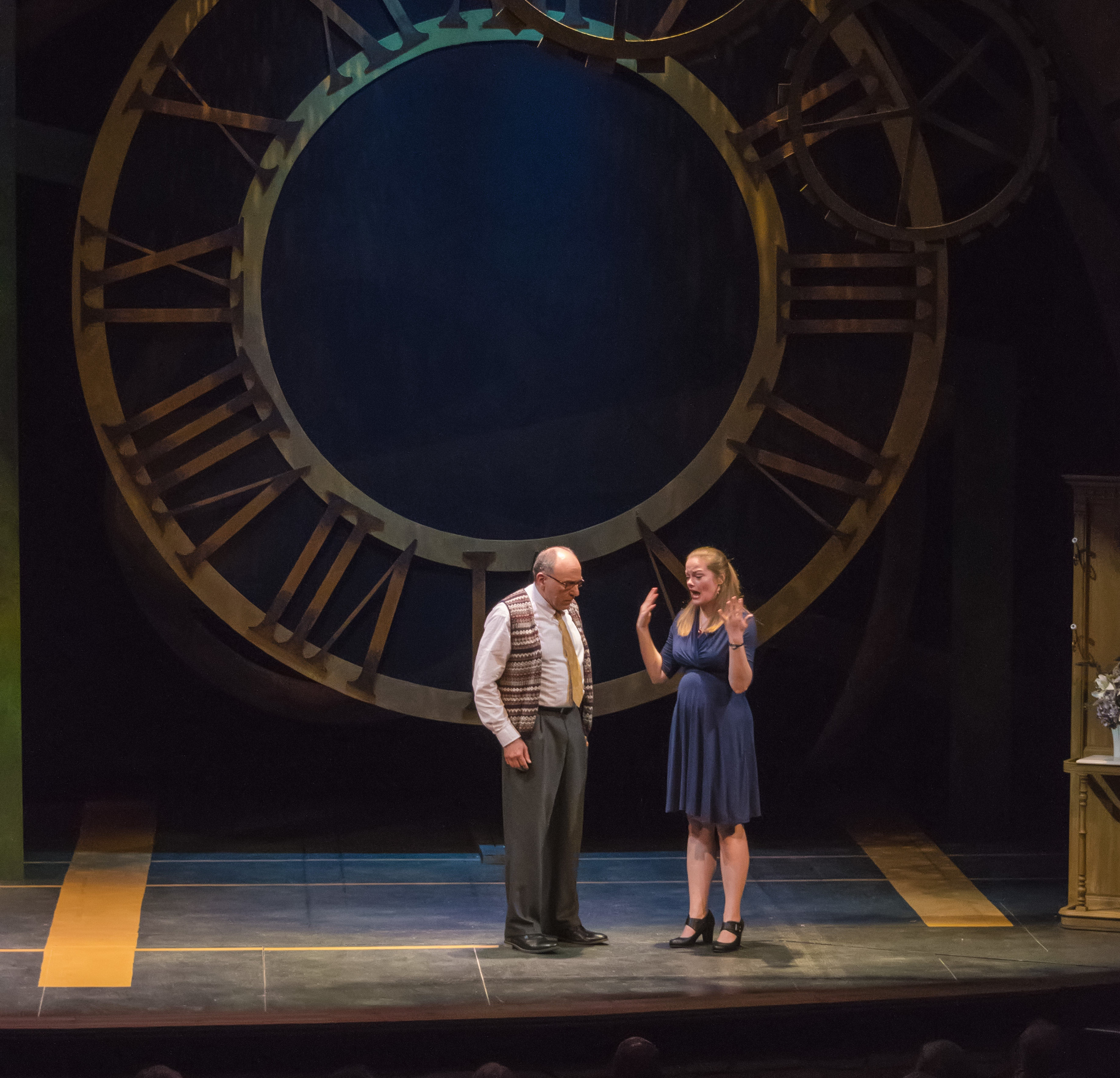 Greg Vinkler and Erica Elam as Ed Brooks and his daughter, Tabitha, in the Peninsula Players production of ‘The Actuary.’ Photo by Len Villano.

“It’s almost like the play is a two-way street: we’re going backwards in time at the same time Ed Brooks is going forward in time,” Peterson said. “He’s telling a story and remembering things that he already knows he’s already gone through but in the telling of it, he makes connections, he understands things, he gains courage himself.”

Ed’s career as an actuary – a vocation he believes makes him not only boring but unassuming enough to conduct himself in surprising ways – is the common thread through the entire play. Peterson recalled working with actuaries for 25 years and exploring their relationship not only to numbers but time, a perspective that informs Ed’s outlook on life and his interaction with the play’s characters.

The Actuary plays out on a set of gear and clock-shaped frames and countless moving parts designed to resemble what director Kevin Christopher Fox described as “a play about what memory feels like.”

“We wanted these changes with these moving parts so that you almost could feel like it’s the inner workings of Ed’s mind and sort of this drawer opening, drawer closing, window opening, window closing,” Fox explained. “That kind of energy that we see now when we do all these changes is what [scenic designer Sarah Ross] and I talked about wanting these changes to feel like.”

The Actuary is on stage at Peninsula Players Theatre through July 2. Show times are 8pm Tuesday through Saturday and 7:30pm on Sunday (except July 2, at 4pm). Tickets range from $38-44 and can be purchased online at peninsulaplayers.com or by calling 920.868.3287.