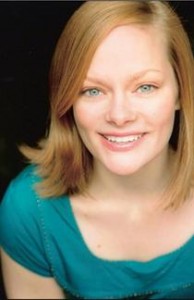 In the foreseeable future, television actors are replaced with programmable robots, and Jacie, an android star, is slated for the scrap heap when a programming glitch is discovered. When the writer kidnaps her to save her, adventure begins!

Returning to the Players to play Jacie is Erica Elam. Elam’s recent credits include Philadelphia Story with Remy Bumppo and The Trip to Bountiful at the Goodman. She has performed with The Second City and is trained in comedic improv.

Directed by Peter Amster, who has directed and choreographed productions for many of the Chicago area’s professional theaters and opera companies, Comic Potential will be Tuesdays through Saturdays at 8 pm and Sundays at 7:30 pm, except the closing performance set for September 5 at 4 pm. Group and individual tickets are available. Individual ticket prices range from $29 to $36.

For more information or to reserve tickets call 920.868.3287 or visit http://www.peninsulaplayers.com.