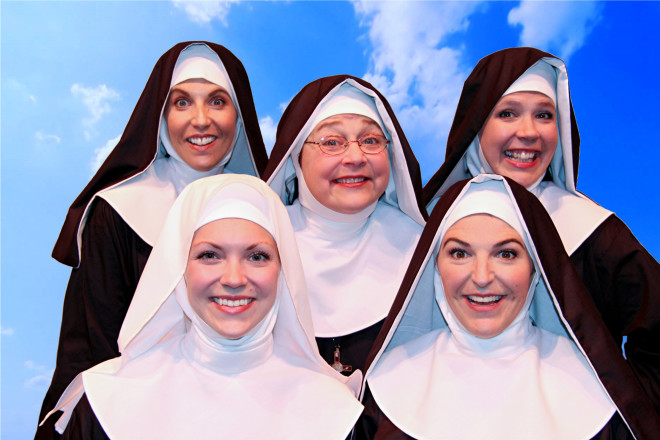 The zany Little Sisters of Hoboken are kicking up their heels and lifting their voices. Join Reverend Mother, a former circus performer itching to reclaim the spotlight, and her four sisters as they stage a riotous variety show filled with comic misadventures that are sure to be habit-forming. The fictional Sisters host a fundraiser after they discover their cook, Sister Julia, Child of God, has accidently poisoned 52 of the sisters. To help cover the burial costs, the surviving sisters take over the 8th grader’s stage production of Grease and host a lively variety show filled with a huge dose of humor and more than 25 original songs.

“Each of these actresses is a powerhouse,” said director Karen Sheridan. “The cast was assembled with great care and consideration. They count national tours, original cast recordings, the Rockettes, and previous Nun(sense) stints amongst them. Players’ patrons might recognize some members of the cast from recent productions. Their voices found an instant blend in rehearsals. They are as angelic as they are comedic, resulting in five sweet and wonderfully fun sisters. Every one of them is going to be an audience favorite.”