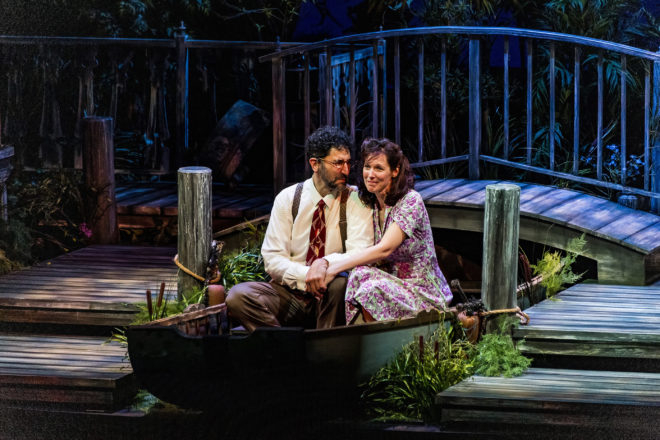 Will They? Won’t They?

Peninsula Players Theatre’s production of Talley’s Folly by Lanford Willson has been a long time coming. The director, David New, first pitched the play to the Players’ artistic director, Greg Vinkler, 15 years ago in the theater’s beer garden. Now, as the theater reopens for live performances, the time is just right to put on this show.

For one thing, Linda Fortunato, who plays Sally Talley, was set to perform in a production of Talley’s Folly at Theater at the Center in Munster, Indiana, where she has served as artistic director. That production missed its opening performance by mere days when the theater’s 2020 season was cut short due to the pandemic. Then, when the decision was made to include the show in Peninsula Players’ 2021 season, Fortunato’s co-star, Sean Fortunato – plus some stunning design elements created for the Munster production – came along with her.

For another, the show’s themes are perfectly appropriate for audience members who are coming out of a pandemic.

“This is a play about two people coming together after being separated for a long time,” New said. “It acknowledges the fact that getting together is not always simple or easy.”

One night in 1944, Matt Friedman, played by Sean Fortunato, travels to Lebanon, Missouri, to see a woman with whom he’d shared a romantic week the year prior. He had sent her a letter every day since, but he had not heard from her. During this trip to her family’s boathouse, he hopes to settle their feelings for one another within the runtime of the play, which he tells the audience directly when the play opens.

Thus begins a 90-minute romantic comedy in which the audience is sure the two unlikely lovers will fall for each other, but it still delights in the fun of seeing exactly how it will happen. A New York Post review of the original production of Talley’s Folly in 1979 called the play a “funny, sweet, touching and marvelously written and contrived love poem for an apple and an orange.”

Of course, any play with only two characters must rely on the strength of its performers, and Linda and Sean Fortunato are stunning in their roles. Sean’s strong and varied performance is grounded by Linda’s more reserved subtleties, and the obvious chemistry of the real-life husband-and-wife duo is on full display as their clear, physical direction amplifies the “Will they? Won’t they?” moments that are abundant throughout the play.

For Peninsula Players Theatre’s first in-person performance following the pandemic, Talley’s Folly is a strong showing that offers the compelling performances, stylish set design and powerful storytelling that this theater company has long been known for – all intact.

Tickets for Talley’s Folly, running through Aug. 15, are available at peninsulaplayers.com.