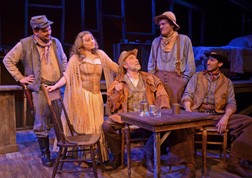 Terry Twyman’s cowboy tale Saloon is on stage at Peninsula Players Theatre through June 30. Set in 1871, when the American West was unsettled, railroads were forming and cattle were still driven hundreds of miles to market by range hands. Saloon features a greenhorn-cowpuncher with a zeal for a life who saddles up with veteran cowhands. Upon arriving at the railhead to sell the cattle, problems arise that test their mettle.

“My father gave me a book about the evolution of the cowboy during the latter half of the 19th century,” Twyman said. “The plot of Saloon rose from the pages as I read it.”

Greg Vinkler was introduced to Saloon more than 30 years ago when he was part of a new play festival in Arrow Rock Lyceum Theatre in Missouri.

“I am happy that the Peninsula Players board of directors, led by Julia Chomeau, and our staff, led by Brian Kelsey, have been so supportive in helping to make this become a reality,” Vinkler said. “This is a play that deserves to be seen by many others and I hope our production helps Terry’s voice be heard in many other venues across the country.”

Also, the series of public seminars returns to Peninsula Players for the eighth season. Free seminars, providing an inside look at topics related to the 2013 season, are held select Saturdays from 2:30 to 4 pm.

The first seminar is scheduled for June 29 with Jim Draeger, co-author of Bottoms-Up: A Toast to Wisconsin’s Historic Bars and Breweries (Places Along the Way). Bottoms Up showcases the architecture and history of 70 Wisconsin breweries and bars beginning with inns and saloons. Forthcoming seminar topics will be announced for July 13, August 3 and 24. For seminar reservations, call 920.868.3287.