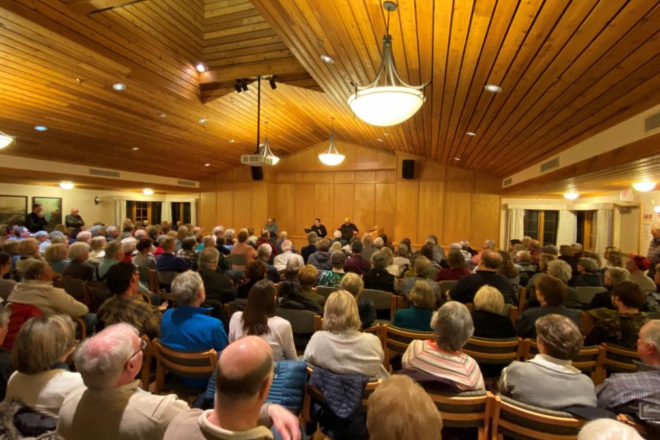 Peninsula Players’ play-reading series is very popular, so arrive early for the March 2 reading of “Haunted: The Great Lakes Ghost Project” and the April 6 reading of “Eternity.” Here (from left), Greg Vinkler, Noah Simon and Joe Foust perform to a capacity crowd in a play reading of James Hindman’s two-person comedy, “Popcorn Falls.” The show was produced with support and in coordination with Door County Reads. Photo by Brian Kelsey.

Peninsula Players Theatre presented a reading of James Hindman’s Popcorn Falls on Feb. 3 to a capacity crowd at Björklunden as part of its The Play’s the Thing play-reading series.

The new two-person comedy is set in the sleepy town of Popcorn Falls, whose only claim to fame – its namesake waterfall – has dried up. An arts grant can save the town, but the mayor and other townsfolk must mount a play within a week.

“It was very exciting to see so many members of the community who have embraced our winter programming,” said Brian Kelsey, managing director. “Tonight’s audience was the largest we’ve hosted, with standing room only for some; and for the first time, we had to turn away several people. We have no immediate plans to move to another venue for future readings, so we suggest patrons arrive early to secure a seat.”

The Play’s the Thing will continue March 2 with a reading of Haunted: The Great Lakes Ghost Project by Michigan playwright Joe Zettelmaier; and Eternity by Wisconsin native Michael Cochran on April 6. Both will begin at 7 pm at Björklunden in Baileys Harbor. Seating is limited. Donations are appreciated.