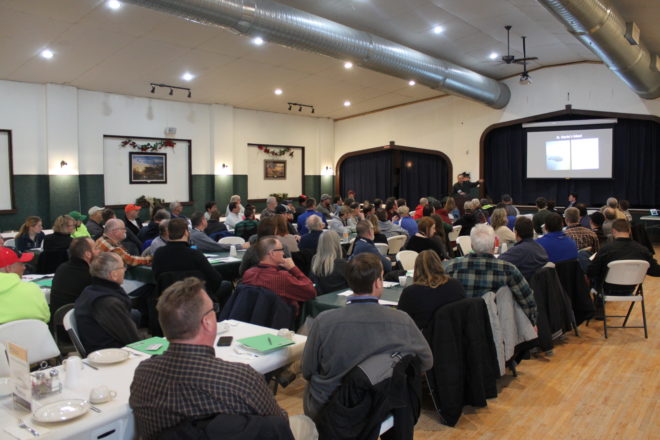 Don Niles, founder of Peninsula Pride Farms and owner of Dairy Dreams in northern Kewaunee County, opened the annual meeting of the farmer-led conservation group on Jan. 31 stressing the expectations that have been placed on the two-year-old group.

“We have to prove that we’re getting results,” Niles said to a group of nearly 100 farmers and agribusiness representatives in Luxemburg. He added that after the group’s success in outreach, research on cover crops and no-till fields, participation in pilot programs, and funding for their water well program during the past two years, they can no longer claim they are just a small group of naive farmers experimenting in their own bubble.

“We don’t ask perfection from our members but we ask for farmers that are committed to continuous improvement,” Niles said.

Davina Bonness, head of the Kewaunee County Soil and Water Conservation Department, presented some of the well testing data to outline the improvement that is needed.

“From year to year, it’s kind of maintaining that 30 percent,” said Bonness. “It’s good to see that the 30 percent hasn’t drastically gone up.”

Peninsula Pride Farms brought together representatives from the local and state agricultural community, conservation groups and agriculture science to talk about ongoing efforts and what the group hopes to achieve in the near and distant future.

“We’re doing the research to come up with the information that doesn’t exist right now so that we can make our community great for non-farms and farmers together,” Niles said.

A panel of experts collectively felt that long-term monitoring of the new efforts was critical to verifying their success.

“Let’s track something over five to 10 years in terms of how is yield and the economics changing because of these practices,” said Steve Richter, director of conservation in agricultural landscapes for The Nature Conservancy.

“We do have three impaired waters, we have a growing dead zone in Lake Michigan,” said Bonness. “Those are long-term goals we’re going to have to start now to get the research.” 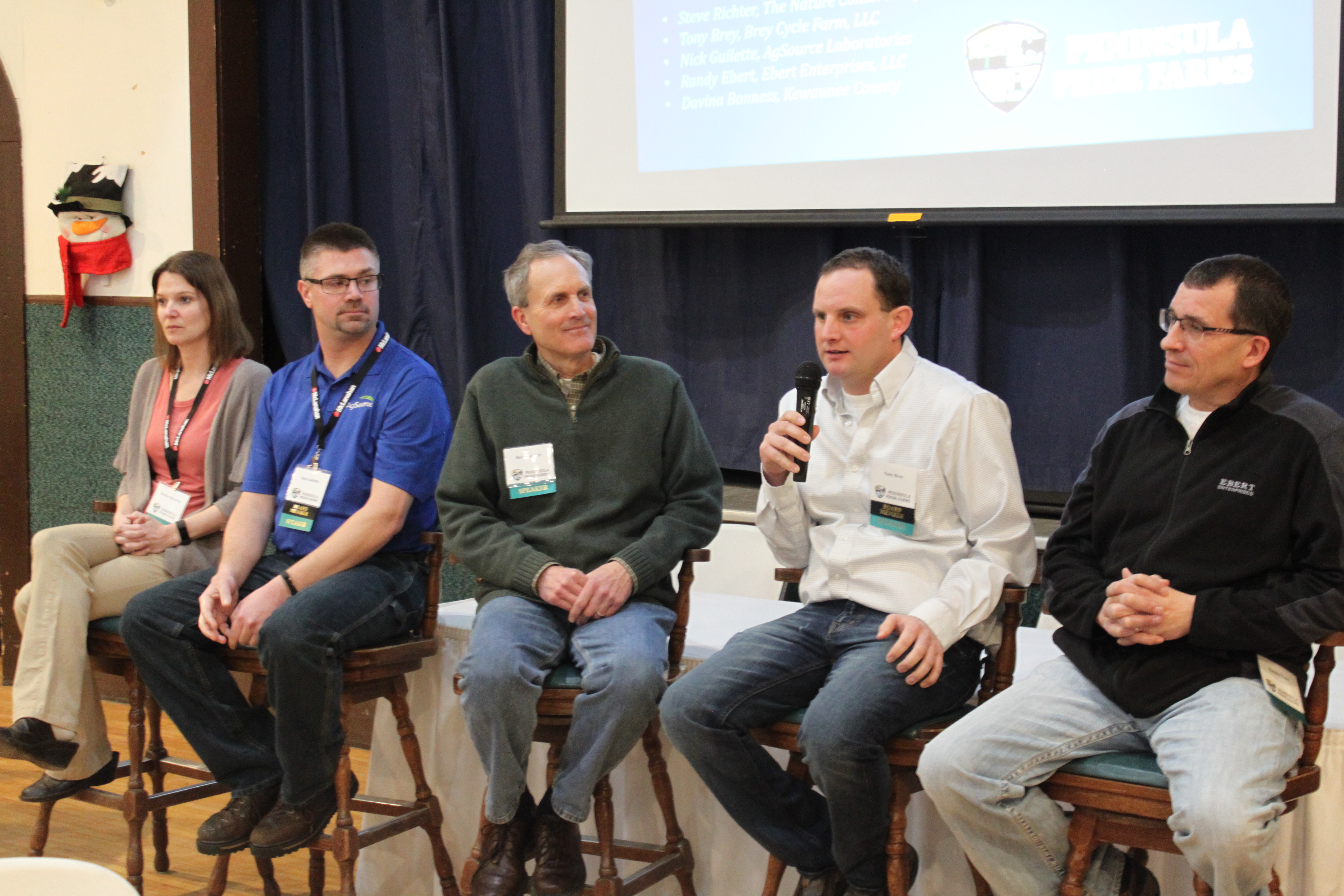 Some of those best practices include cover crops and no-till, which help with soil erosion and hold onto more water and nutrients.

But most of the conversation about future goals involved soil health.

“Soil is an incredible living matter, it’s not just dirt,” said Richter. “Soil health, to me, is this incredible biological activity that will help take up not only organic matter but help plants grow and keep soil in place.”

“I’d like to see more investigation on soil health,” said Nick Guilette, agronomist with AgSource Laboratories. “Soil health is going to be a long-term progression.”

Soil health can generally be explained with three qualities:  the ability for soil to hold onto water, the amount of organic material in soil, and the level of biological activity in the soil. Healthy soil holds onto more nutrients and water, meaning there will be fewer pollutants getting into groundwater or leaching into streams and more food for the growing crops that need it.

“I believe, even in our shallow soils, if we can increase that organic matter and increase soil health, Mother Nature will take care of itself and cycle those nutrients through,” Guilette said.

As Peninsula Pride Farms is able to educate those who otherwise would never change their traditional ways of farming, these best practices are trending.

Nathan Nysse, of Tilth Agronomy, who performed the survey, said this shows farmers are willing to participate on their own dime whether it’s for the economic or environmental benefit.

In the current year, Peninsula Pride Farms is focused on research while continuing assistance for residents with contaminated wells.

Niles said research in collaboration with the water quality group UW Discovery Farms will look at how much of the nutrients applied to the topsoil are found in the water that drains below a field and in the crop that is harvested.

Niles closed the meeting stressing the open communication the farming community has achieved with other clean water stakeholders in the county is essential to continue. Speaking to the non-farmers in the audience, he said, “If you hear about something that the farm community is doing, go down the road half-a-mile and ask. We’re happy to talk about what we’re doing.”

Of all member farms of Peninsula Pride Farms, 25 responded to a survey sent out to gather information on their attempts at conservation practices in 2017.

Percent of farms that tried a new conservation practice in 2017, including cover crops, no-till, interseeding and low-disturbance manure spreading.