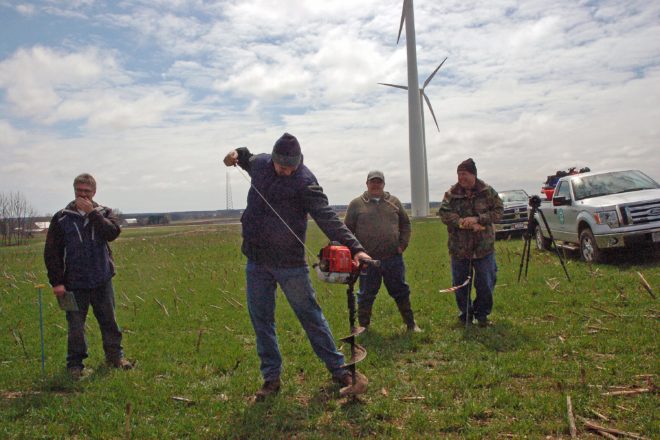 Nathan Nysse, a consultant with Tilth Agronomy, attempts to fire up a three-foot auger to show how he checks soil. Photo by Jim Lundstrom.

The organization is a coalition of 40 farmers in southern Door and Kewaunee counties with herd sizes from 66 to 6,000. The group chose Earth Day to hold a public event on the importance of determining soil depth to bedrock. The event was held at El-Na Farms in Rio Creek, which is owned by three brothers, Barry, Lonnie and Shane Fenendael. The farm has been in their family since 1858, and the Fenendaels pride themselves on staying abreast of technology to run the farm. 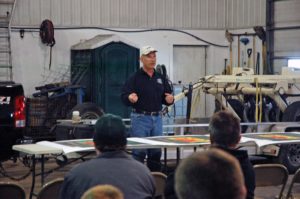 “Education and outreach are important to the Peninsula Pride Farms mission,” said Don Niles, a veterinarian and dairy farmer in Casco who serves as president of the group. “At the same time we are empowering farmers with knowledge and training, it is important that the broader community sees the work as it happens.”

Niles said Peninsula Pride Farms is modeled after a Dane County group called the Yahara Pride Farms, which was founded in 2011 in partnership with the Clean Lakes Alliance.

The mission statement for Peninsula Pride Farms reads: “We are committed to protecting, nurturing and sustaining our precious soil, water and air. To foster environmental stewardship, we will promote practices with measurable outcomes that secure and enrich the future of our shared community.” 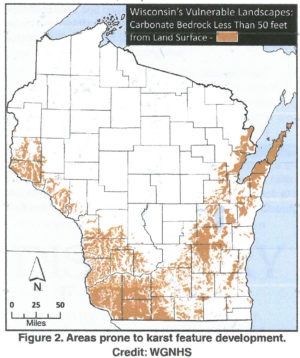 The practice promoted at the Earth Day event was measuring depth of soil to bedrock. The group assembled a team of experts who are out in the fields doing the measuring with a variety of instruments, from a simple tungsten probe to a machine that sends out and reads electrical impulses.

The session began with the experts talking about why it’s important to know soil depth and explaining how they go about determining that depth. That was followed by a bus ride to a field for a demonstration in determining depths.

“Depth of soil is not just important to CAFOs,” said Dennis Frame, a retired UW-Extension professor and co-founder of Discovery Farms. “It is not a large-small thing. If you live there and are doing things, you really need to understand that better management decisions are based on what’s beneath the ground. You better know if groundwater and bedrock is that close to the soil.” 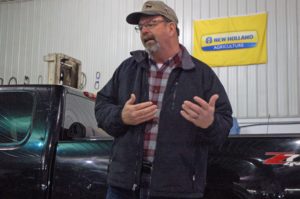 Frame serves as an adviser to Peninsula Pride Farms, one of four farmer-led initiatives in the state that he is working with. Frame said he is proud that area farmers felt the need to organize and educate to reach what he referred to as “ground truth.”

“This program can bring about dramatic positive changes to farming systems, and I believe that this has the potential, if given adequate time, to be a national model for farmer-led watershed projects,” Frame said.

Eric Cooley, also of UW Discovery Farms, talked about the inadequacy of previous soil surveys that were done between the 1960s and 1980s by reading the landscape and using bucket augers.

“The soil survey that we have really has to be taken with a grain of salt. It is a great tool, but it is not a perfect tool, so we are trying to go on to that next level,” he said. “We’re trying to build off the best information we have, which is the soil survey.” 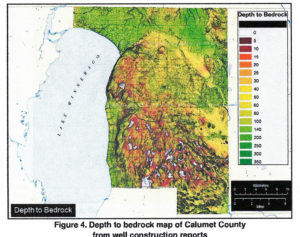 Cooley explained that in response to the need for accurate information, Discovery Farms developed a pilot soil mapping program in Calumet County, which is another karst area.

They used a variety of technology in the mapping, including using seismic refraction, which is used to survey for oil deposits.

“This was probably the most accurate tool we found down in Calumet County, but it is very expensive and time consuming,” Cooley said.

Todd Koss has his own nutrient management planning company called Koss Ag LLC. He talked about a very simple method of determining soil to bedrock using a $125 soil probe.

He plots out a 2½-acre grid and begins probing.

“If I do find bedrock, I try to find the edge of it and make a hazard map,” he said. “It’s a lot of work but it’s inexpensive. It’s easy to do but it gets physically trying if you have a lot of fields you want to check.”

Nathan Nysse, a consultant with Tilth Agronomy, explained his simple method of determining soil depth is using either a shovel (“very intensive, very backbreaking”) or a three-foot auger (“you can see what’s coming out of the ground”). 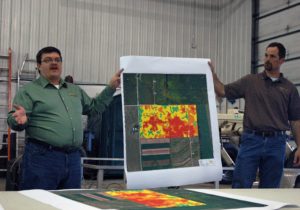 He then introduced Tilth colleague Matthew Brugger, who uses a Veris EC 3100.

“Instead of digging holes all over the place, Veris gives a better indication of questionable soils,” Nysse said.

The EC in the machine’s name stands for Electrical Conductivity. Brugger explained that the Veris has six discs that barely disturb the top of the soil and send electrical signals into the ground and then receives them to determine soil depth.

One of the people in attendance at the presentation was Dale Konkol of the Door County Soil and Water Conservation Dept.

“This is definitely good, any time we can get people together and discuss topics and, look for solutions,” he said. “If they want to work together, that’s great.”

Niles said Peninsula Pride Farms hopes to include other farmers in the future and to hold other educational forums. For more information, visit peninsulapridefarmsinc.org.