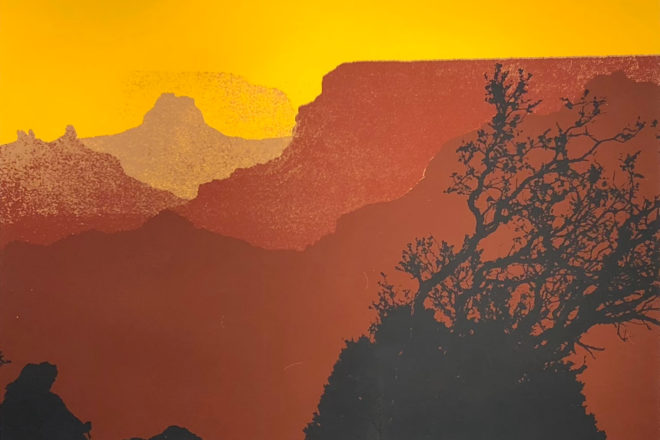 Peninsula Printmakers, the first exhibition for Sturgeon Bay’s Miller Art Museum celebrating 43 years in 2018, will feature more than 50 recent acquisitions and seldom-displayed works from the museum’s collection of original prints by four significant Peninsula artists:  Joseph Cook, R. Charlie Lyons, Ruth Wedgwood Philipon and Albert Quinlan. The exhibit is scheduled to open March 3 at 10 am with a reception from 3 – 4:30 pm. The event is free.

The exhibition examines printmaking, primarily of the 1970s in Door County, as a primary form of expression for the four artists who’ve been selected for inclusion. While there is no unifying style or approach to the works being exhibited, visitors will see serigraphs, also known as screen prints, hand-colored woodcuts and a combination of engraving and etching with embossment in the work of Ruth Wedgwood Philipon.

Among the earliest works on view include “Anniversary Portrait” (1964) a black and white woodcut by the late artist R. Charlie Lyons. The piece is representative of Lyons’ classic and distinctive style, whose technique of choice was woodblock printing. Visitors will also see selections from Lyons’ earliest sets of woodcuts, “A Remembrance of Places Past,” which reflects his affinity for architecture in his hometown of Sturgeon Bay.

“We are constantly adding to our permanent collection and Lyons is an artist whose work we’ve been working to collect,” said Executive Director Elizabeth Meissner-Gigstead. “This exhibit is particularly poignant from the standpoint that it’s the first for the Miller Art Museum since his passing in early 2007. Interestingly, Charlie was instrumental in developing our collection, which now nears nearly 1,000 works, and there is no one individual who knew more about Door County art and artists.”

Lyons’ work will be exhibited alongside three of his contemporaries: Joseph Cook, Ruth Wedgwood Philipon and Albert Quinlan, creating a platform for the viewer to engage in a fascinating visual dialogue reflective of the 1970s in Door County’s art history.

Peninsula Printmakers will be on view at the Miller Art Museum through April 16. For more information, call 920.746.0707 or go to facebook.com/millerartmuseum. The museum is located in the Door County Library in Sturgeon Bay located at 107 S. 4th Ave. Hours are 10 am to 8 pm on Monday, and 10 am to 5 pm Tuesday through Saturday. For more information visitfacebook.com/millerartmuseum or call 920.746.0707.