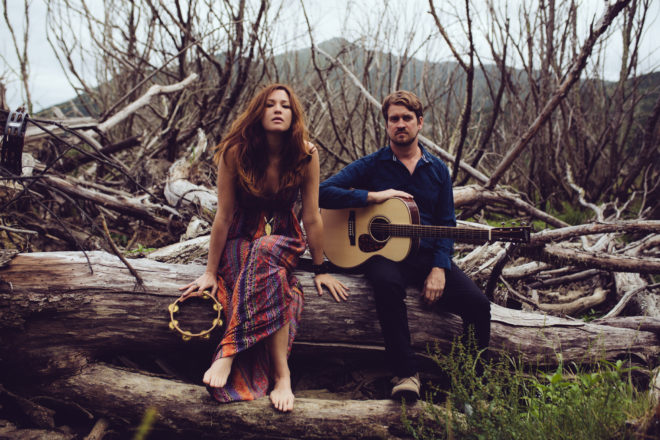 You would be forgiven for thinking this music writer’s opinion of the Nashville-based band The Danberrys is heavily biased. I met the band’s members not long after I moved to Tennessee, and we became fast friends. I have toured as its bass player and backing vocalist all around the United States and New Zealand.

Although it’s true – I think the band is awesome, and I am excited to join the group for its Door County concerts – The Danberrys also have an impressive collection of press to prove I’m not alone in my opinion. Andy Thorley of Maximum Volume called the band’s latest album, Shine, “genuinely superb.” Music Connection Magazine described the group as a “captivating sound that traces its lineage to the mountain folk tradition.” And American Songwriter included The Danberrys in its Best New Music list.

Born and raised in Dickson County just outside of Nashville, Ben Deberry (guitar, vocals) and Dorothy Daniel (guitar, vocals, percussion) met in high school and quickly bonded over a mutual love of music. They married in 2006, but it wasn’t until 2011 that they started releasing original recordings.

“When we were married, I had already been in many cover bands and small local bands,” Deberry said. “At the time, Dorothy was very stage shy, and it took some coaxing over the next five years to get her on stage with me during my cover gigs. By 2010/2011, we had begun performing more, and I wrote a handful of songs that were recorded on our first EP, called Company Store.

The band’s name, The Danberrys, originated as something of a joke, joining the two songwriters’ last names – Daniel and Deberry – with a smirking nod to the era’s famous-couple nicknames, such as “Brangelina”: the combination of Brad Pitt and Angelina Jolie’s names.

Now, with one EP and three full-length albums to their credit, Daniel and Deberry are celebrating the 2020 release of Shine to glowing reviews and acclaim.

“We’ve had a great response from the press,” Deberry said. “It was a bit of a departure from our previous records, which were primarily acoustic in nature. The new record is pretty electrified, but the songwriting is still similar to what we have always done.”

Highlighting two incredible performers who are both highly skilled at their respective instruments, a live show by The Danberrys brings the fire of up-tempo bluegrass, funk grooves that will get you dancing right out of your seat, and soul-wrenching, emotional lyrics that don’t shy away from difficult subjects.

“There is a lot of spirituality in our writing,” Daniel said. “We’ve been through a lot of really hard stuff. We had to grow a lot. That comes out in our music.

“My goal in life is to figure out what we are doing here. Why are we here?” Daniel asked. “There are a lot of reasons to feel helpless, pointless and irrelevant in this world. I want people to feel hope when they listen to our music. That’s the reason we do it.”

The Danberrys’ songs feel somehow preordained, as though they should have been written decades ago. Gerry McNally of Folk and Tumble describes the songs on Shine as “Replete with the influence of old-time Americana spirituals and sound as if the lyrics were lifted straight out of The Great American Songbook.”

Something audiences can look forward to is the truly exceptional tambourine playing of Dorothy Daniel. Armed with two tambourines, she creates the sound and energy of a full kit drummer, often while also singing lead vocals.

“Dorothy is an exceptionally gifted tambourine player,” Deberry said. “Once she starts playing, it’s hard to watch anyone else. It is like an extension of her body, and she really does create amazing textures and support for the band.”

With four local performances coming up next week, the band is excited to share its acoustic show with the Door County audiences.

“Friend and world-class bassist/vocalist Vanessa McGowan will be joining us on upright bass,” Deberry said, “and John Mailander will be bringing his always-tasty fiddle tones and smiling face. We really couldn’t have a better band for this run!”