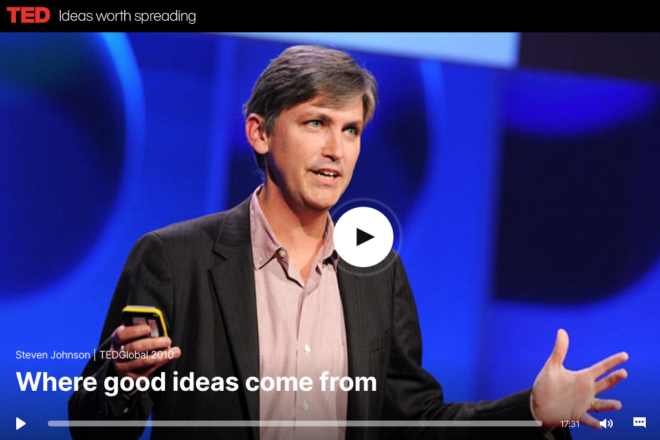 Steven Johnson in a screenshot of his TED talk.

When best-selling author Michael Perry spoke at a Nov. 6 dinner at the Kress Pavilion, he said that one of the most frequent questions he’s asked is, Where do you get your inspiration? And he answers that he gets it from a little man who sits at the bank and handles his mortgage.

For Perry, inspiration isn’t mystical. Creativity comes from necessity (and, perhaps, a natural talent and a need to write and tell stories). This concept of creativity coming from some known or concrete source of inspiration is an intriguing one for anyone who’s wondered how things come to be and how good ideas are thought up or created.

This question – where do ideas come from? – was the topic of the first installment in the Conversations on Creativity series at the Peninsula School of Art (PenArt) on Nov. 20. Held monthly on the third Wednesday, the series is intended for creators, makers, learners, viewers and anyone else who is curious about the creative process, art making and artists.

At this first meeting, a group of artists, some of the leaders at PenArt and a few curious people outside the world of visual art gathered around a table, enjoyed some coffee and treats, and watched two TED Talk videos. The overarching question was, How do we generate the breakthrough ideas that push forward our lives, our society, our culture? The first talk was by Steven Johnson, author of the best-selling Where Good Ideas Come From: The Natural History of Innovation, in which he took an interdisciplinary approach to looking at innovation.

Coffee shops are the example Johnson gave of a space where creativity thrives. They are places where people of all backgrounds gather and exchange ideas. He said, “We take ideas from other people, from people we’ve learned from, from people we run into in the coffee shop, and we stitch them together into new forms, and we create something new. That’s really where innovation happens. And that means that we have to change some of our models of what innovation and deep thinking really look like.”

Ideas don’t happen in vacuums. Despite the notion of “eureka moments,” an idea eventually becomes a good idea through connecting and engaging with other people. Johnson closed with this line: “Chance favors the connected mind.”

This idea of connectivity and engagement resonated with the group about how the best ideas come about through sharing: We need other people to reform and revise how we think about our creative endeavors.

The next talk – by Elizabeth Gilbert, best-selling author of Eat, Pray, Love – was called “Your Elusive Creative Genius.” Through anecdotes, Gilbert argued that creatives shouldn’t suffer for their craft and that their creativity comes from a balance between some unknown force and a pragmatism that forces them to show up for their jobs like any other person. She said that she’s often asked about whether she was afraid to become a writer, and then after she became a successful writer, whether she was afraid that she could not create another successful work.

Gilbert said, “What I have to sort of keep telling myself when I get really psyched out about that is, don’t be afraid. Don’t be daunted. Just do your job. Continue to show up for your piece of it, whatever that might be.”

Gilbert has a more spiritual and psychological approach to understanding sources of creativity, and Johnson was more analytical. The group had an easier time processing Johnson’s TED Talk, and the discussion bounced among many ideas, including how social media add to or detract from creativity and engagement, and how fear and adversity can affect creativity.

Through the talks and discussion, it was obvious that creativity breeds more creativity, and that people pass ideas back and forth in ways that enables those ideas to grow and, hopefully, become great. Also, thinking about creativity and rejecting the accepted notions of it can help anyone reimagine creative processes. So, if a muse hasn’t visited you lately, or your source of creative juices has runneth dry, these conversations and engaging with other creatives may help.

The next Conversations on Creativity program will be Dec. 18, 3-5 pm, at Peninsula School of Art. The topic will be “The Creative Brain,” and the group will watch and discuss the documentary The Creative Brain by neuroscientist and best-selling author David Eagleman. No advance registration is needed, and the program is free and open to all. Learn more at peninsulaschoolofart.org/events/conversations-on-creativity.