Milwaukee sculptor and teacher, Marina Lee, guides the 2008 Parade Workshop through a practice march in the parking lot of Peninsula School of Art. Photo by Kay McKinley.

Over the past 20 years, a band of children representing the Peninsula School of Art have produced large-scale, lightweight sculptures and banners to display along the parade route of the Baileys Harbor Fourth of July parade. This year, the tradition will continue.

Ranging in age from 6 to 12, and divided in two age groups, about two dozen children will follow an overall theme in the school’s annual parade workshop, which will be held Tuesday – Saturday, June 30 – July 4 this year, leading them through the process of creation through presentation.

After completing the work in the first three days of a five-day program, both age groups come together on the fourth day to rehearse their combined efforts for the parade on the final day.

Over the years, parade entries have ranged from the specific, such as country music stars (represented by the giant-headed puppets of Dolly Parton and Woody Guthrie) to the general theme of change and hope embodied in the mid parade route change of a caterpillar into a butterfly. This year the children will explore the theme of diversity through the symbolism of fish 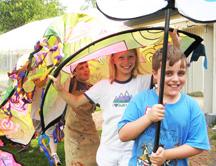 Craig Wilson, in the 9 – 12 age group, leads the group in the butterfly phase of the parade presentation during practice at the Peninsula School of Art. Photo by Kay McKinley.

The parade workshop began with the input of volunteer organizer Carol Sills. Sills was inspired by a friend who belonged to the politically-charged 1960s era Bread and Puppet Theater of Vermont, which employs the use of giant puppet heads in their work.

For the past three years, Milwaukee sculptor Marina Lee, who has several elementary school artist-in-residence appointments under her belt, has guided the Peninsula School of Art’s parade workshops.

Peninsula School of Art offers one-to-five-day workshops in all 2- and 3-D media for all ages and skill levels. During the summer months, the school’s Studios for Young Artists program offers nearly 40 workshops for children from 3.5-years-old through their teen years. Along with encouragement and a spirit of play, at the heart of the program is age-appropriate curriculum that builds skills in the full spectrum of media.

For further information on the Studios for Young Artists or other programs and exhibits at the Peninsula School of Art, please contact Kay McKinley Arneson, Director of Marketing and Exhibitions, at [email protected] or 920.868.3455.