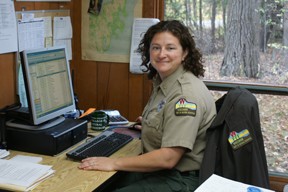 Kelli Bruns, most recently the superintendent for Willow River and Kinnickinnic State Parks in the Hudson, Wi. area, will step into the Peninsula post Sept. 1.

“I’m really excited to get my foot in managing this world-class state park,” Bruns said during a break from unloading her first U-Haul full of furniture into her family’s new home in the park. “There’s a lot of work for me to do and a lot of history to learn, and I’m looking forward to getting hands on and talking to the staff and the people in the community here.”

Before her year in the Hudson area Bruns was Park Manager at Kohler-Andrae State Park in Sheboygan for eight years. She’ll move with her husband John with three boys age 14, 4 and 2 years old. She said she is looking forward to a long tenure.

“I’m 36,” Bruns said, “so I figure I have a lot of time to dig in and put many years into Peninsula State Park.”

Since Blackwood retired the park has been managed on an interim basis, first by Gene Tiser, and by Erin Brown since January. Jean Rygiel, Property Management Section Chief for the Wisconsin State Parks System, sounded relieved to finally have stability at the top of the state’s second most popular park.

“I feel very happy to help out with the economics of Door County and to get such a qualified person into the position,” she said. “Kelli has a very strong work ethic and a good feeling for the mission of the state parks. She also has an excellent history of working with support groups and community organizations.”

That experience will be vital at a park that boasts partnerships with a strong friends group, American Folklore Theatre, Peninsula Golf Course, Eagle Bluff Lighthouse, and the Door County Half Marathon.

Bruns was born in Sheboygan and spent her summers in Newfoundland, Canada, where her mother is from, and holds duel Canadian and U.S. citizenship. She said it was in Newfoundland that her love of the outdoors was forged among her uncles, who are all commercial fisherman.

“I’m rooted in natural resources,” she said. “Newfoundland brought me close to the water and is probably why I’m so drawn to it today.”

“Transitioning is always tough for state parks,” Bruns said. “You’re leaving one park, and one group of friends behind, and starting new somewhere else. But I’m really looking forward to learning the ins and outs here. Tom Blackwood has already touched base and it will be great to talk to him. I do know that this park has a really special niche in the community.”