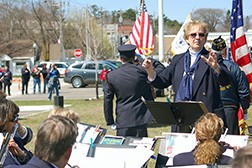 Who would drive two hours to a venue, spend hundreds to thousands of dollars on equipment and instruction, devote countless hours of hard work and not be paid? Answer: A musician, all for the love of music.

Once upon a summer evening, before sunset, when all the boats were headed toward shore, Sister Bay, Fish Creek and Ephraim experienced an enchanting musical event that echoed throughout the harbors in July and August.

In the mid-1950s, a group of talented and dedicated musicians dusted off their horns and drums and gathered to bring music to the bay with concert cruises. Primarily the Gibraltar High graduates of 1942 organized the civic band. They would don nautical hats and board Ranny Nelson’s 40-foot excursion boat, decorated with lights donated by local fishmonger Joe Dlouhy and delight residents and vacationers with music at the ports of Fish Creek, Ephraim and Sister Bay.

The Sister Bay Civic Band would perform eight to 10 concerts a summer, weather permitting. They would play Sousa marches, classic band music and “Legendary Air” would resonate over the waters.

The Civic Band was under the direction of Mel Kasen, then high school band director of Gibraltar High. Most of the musicians in the band were residents of Sister Bay and Northern Door. They included a postal worker, a jeweler, housewives, farmers, salesmen, a sign painter and professional musicians.

In the same spirit of music, an exciting event is coming to Sister Bay on Monday, July 13, at the new village band pavilion. The Peninsula Symphonic Band will perform “Dancing On the Door,” an outdoor concert at 6:30 pm, with a polka, a tango, movie themes, circus music and, fittingly for the month of July, Sousa marches and patriotic music.

The concert will showcase its talented trombone and sax sections, featuring George Draeb on trombone and Don Carlson on tenor sax.

Concert highlights will feature movie themes from The Cowboys, West Side Story and the song “Happy” from Despicable Me 2.

Under the direction of Paula Eggert, the Peninsula Symphonic Band is a multi-generational band comprised of musicians from all walks of life – members include a range of professions from teachers to lawyers, doctors, a judge, jeweler, innkeepers and professional musicians. Instrumentals include high school students to folks in their 80s.

Pack a picnic basket on July 13 and join the band in making memories. The Peninsula Symphonic Band last played in Sister Bay in 1991, so please attend and support your Sister Bay musicians, Christy Sully on French horn and Patrice Champeau on flute.

For those with a high school or college level of musicianship, consider joining the Peninsula Symphonic Band. For more information, visit peninsulasymphonicband.org.