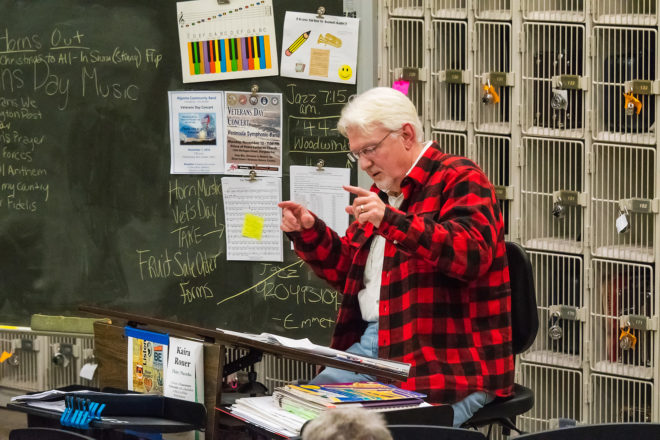 Earlier this year and with little fanfare, Paula Eggert ended her 14 years as musical director of the Peninsula Symphonic Band (PSB) and turned the baton over to Jason Palmer, making him the fourth person to lead the volunteer musical organization since it was founded in 1990.

“It’s a new director, I won’t say a new direction,” said PSB charter member George Draeb, one of the five trombonists in the band. His wife, Joan, plays in the clarinet section.

“Jason’s a good director,” Draeb said. “He would like us to play a little more challenging music. He picks a piece, we say this is tough and he says play it.”

For example, Draeb said the annual PSB Veterans Day Concert, to be held at 7 pm Monday, Nov. 12, at the Prince of Peace Church in Sturgeon Bay will feature all four movements of Gustav Holst’s Second Suite in F.

“We’ve played the first three movements before,” he said. “Jason added the fourth movement. It’s a tough one.”

“Paula Eggert did this for 14 years. She had a long tenure and decided it was time to step away,” Palmer said. “I think after you’ve gotten used to somebody, it’s a little bit daunting to find somebody new at the helm.”

This is the couple’s second time living in Door County.

“My wife and I lived here from 2010 to 2013, then grandchildren happened and we went back to Illinois for about five years,” Palmer said. “Now we’re both retired and we said, ‘We’re going back to paradise,’ and this just happened to crop up at the right time.”

During that first stint, Palmer worked for Door County United Way and the YMCA.

“I’d also played organ for Hope Church and played in pit orchestras for both Peninsula Players and Northern Sky,” he said.

He now serves on the board of directors of United Way of Door County and plays organ twice a month at Bay View Lutheran Church.

And his experience with the Peninsula Symphonic Band before becoming musical director?

“I was only familiar with them by name. I had never heard them play,” he said.

He admits that he did not know what to expect from a community band with no auditions, just an open invitation for players to come and sit in and play.

He and his wife arrived back in Door County on June 11, “and a week later I had my first rehearsal with the band. I came in with a little bit of trepidation because ensembles I had worked with previously had auditions and section leaders, so coming in where they just say, ‘Come play,’ I said, ‘How does that work?’ But they really exceeded my expectations. They’re really a fine group, and I’m having a good time.”

He is particularly impressed by the group’s dedication.

“We have everything from people working 40-hour weeks, people who are retired, school teachers,” he said, adding that they all are volunteers.

Next month comes the annual holiday concert, and in May PSB is planning a concert completely centered on water to tie into Celebrate Water Door County, which holds a water summit June 4-6 at the Landmark Resort.

“The water concert was the brainstorm of a member of the band,” Palmer said. “I said, ‘Wow, let’s do it!’ I am always open to suggestions.”

Palmer also wanted to extend an invitation for musicians to sit in with the band.

“I’d like to invite more people to come and play,” he said. “It’s a fun and accepting group that makes great music. If anyone has any qualms, just come and find out. We rehearse at 7 pm in the band room at Sturgeon Bay High School. Just walk in and we’ll take it from there.”

Asked if the band is lacking any particular instrumentation, Palmer said, “We’ve got a couple of alto saxes, but we need a good tenor and a good bari sax. I know they’re out there. We’ve just got to find them.”

The Peninsula Symphonic Band will play a Veterans Day concert on Monday, Nov. 12 at Prince of Peace Lutheran Church in Sturgeon Bay. The concert begins at 7 pm. For more information visit peninsulasymphonicband.org.