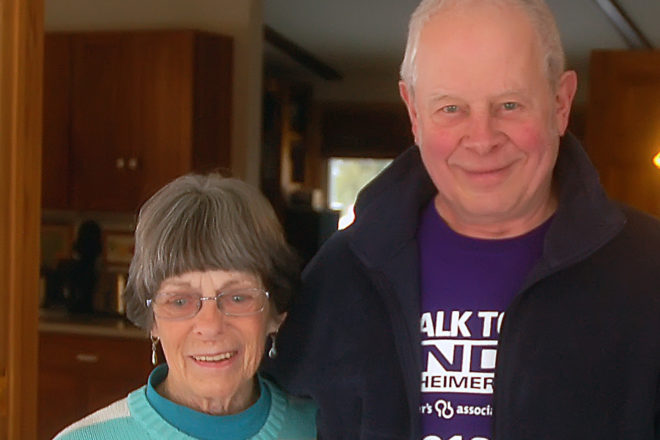 David Link found himself missing the camaraderie of the workplace after retiring to Door County about a dozen years ago.

“On the job I had a lot of work friends, people I would see daily and who I liked a lot, but who I rarely saw outside of work,” he said. Though he admits he’s not the most gregarious person, he missed the daily contact with workmates.

David had worked as a shop teacher. A shop teacher friend of his had retired and moved to Door County a couple years before he and his wife, Carrie, moved to Baileys Harbor.

“He got involved with Habitat for Humanity,” David said. “I got involved, following his example, and quickly got hooked. That was in 2007, so it’s been more than 10 years now.”

While he had no experience building homes, David is comfortable around tools, “which I’m sure helped me pick it up,” he said. “I thought it would be a good fit for me. It’s also a good excuse to buy more tools.”

He found himself working with men from a wide variety of backgrounds.

“We do get people coming in that know almost nothing about building. They just want to help,” David said, adding that “it’s all pretty systematic.”

Meanwhile, Carrie, a retired nurse, had toyed with the idea of going back to work as a nurse, but eventually offered her services as a volunteer at Door County Medical Center and Scandia Village.

However, she learned from her husband that Door County Habitat for Humanity was having trouble keeping a site hostess.

“Lots of times there was no site hostess,” Dave said. “When Carrie started in 2015, she’s the first person who’s been in this position consistently.”

She’s on site every build day, where her duties include greeting the folks who donate food to the work crew and doing odd jobs around the site. She keeps the crew hydrated, and occasionally her nursing background kicks in.

“I have put on a couple of Band-Aids from time to time,” she said. “I thoroughly enjoy it. It’s just a wonderful group of men who enjoy what they’re doing.”

“I think Carrie gets along with men easily, in a way some women don’t,” David added.

“I feel satisfied that I’m doing something. That’s the selfish part of it, just doing something,” Carrie said. “But it’s for a good cause. I enjoy seeing these retired men put their heart and soul into building a house. The organization is a very worthy one. It’s amazing to see a home blossom on the site.”

The couple said they especially enjoyed the 2017 build in Sturgeon Bay for Kendra Bilodeau and her two children.

“Kendra really put a lot of her own sweat and blood into it,” Carrie said. “She was there every Thursday working. It was rewarding to see that.”

“The vast majority of Habitat recipients have been single mothers,” David said. “They all have to put in sweat equity, but it’s somewhat rare because of circumstances — jobs — to see them helping out with construction as much as Kendra was. That’s always heartening, when a recipient is participating at that level.”