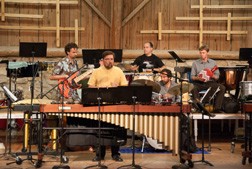 The Birch Creek Percussion & Steel Band concerts continue with captivating music from around the world. Familiar faces return to perform in Percussion & Steel Band concerts such as Dan Moore. Dr. Moore is a Professor of Music and Associate Director of the School of Music at the University of Iowa. This is his 14th year at Birch Creek and he is the featured performer during the July 12 concert “Percussive Postcards.”

“Hot Nights/Cool Jazz” will be performed July 17. After the show, view the stars and planets with members of the Door Peninsula Astronomical Society, who will explain what can be seen through the telescopes.