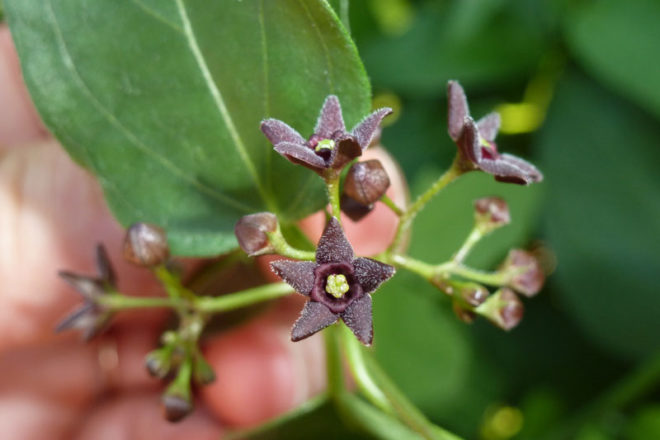 A Minnesota Department of Agriculture photo shows black swallow-wort, a vine that strangles other plants and is toxic to monarch caterpillars.

Door County Master Gardeners provided annuals and tomatoes, and shared years of know-how with visitors during their annual plant sale at the Peninsular Agricultural Research Station north of Sturgeon Bay over the weekend.

But they also took precautionary measures to ensure that they didn’t share anything that could harm plant-sale patrons’ gardens, lawns or woodlands. By choice during the sale, the master gardeners did not sell any perennials that were not raised from seed.

Usually, they split and repot larger specimens from their homes and gardens, but because of the recent discovery of an invasive species – “jumping worms” that compromise established plants, consume massive amounts of organic material and drastically loosen the surface soil composition – the gardeners set an example by not transporting soil from their properties to the sale. The jumping worms die every winter, but they multiply by leaving tiny cocoons in the soil. Because of that, hikers are encouraged to clean their footwear whenever they enter nature preserves, and even when they leave their lawns and gardens.

“After discussing it, we decided not to have perennials,” Door County Master Gardeners president Mary Moster said between visits with patrons at the information table. “I don’t want to imply that we are concerned about growers’ plants having jumping worms. We made a decision to stick to selling what we grow in the greenhouse from seed and what we have control of.”

The gardeners sold a few perennials that were easy to grow from seed, such as hollyhocks and a couple of types of native phlox. But mainly they sold annual herbs, tomatoes, vegetables and flowers that they’d raised in a greenhouse on the Peninsular Agricultural Research Station property.

“We’re very, very delighted that they let us use the greenhouse,” Moster said.

The gardeners at the information table didn’t necessarily plan to discuss news about invasive species, but they had plenty of advice and information for anyone who asked.

This spring, a warning to gardeners circulated on environmental pages in Minnesota and north-central Wisconsin about a flashy garden-center lupine that could poison the caterpillars of a tiny, native butterfly that lays its eggs only on lupine. The Master Gardeners had seen that story and noted that although the Karner blue butterfly needs to lay its eggs on native lupine and not certain cultivars, the butterfly isn’t found in Door County.

But there is another nonnative plant on the peninsula that can kill butterfly caterpillars, said Samantha Koyen, director of the Door County Invasive Species Team (DCIST). Each year, DCIST works to control a Baileys Harbor population of a climbing, tiny-flowered plant called black swallow-wort that spreads its seeds easily.

That plant is prohibited in Wisconsin, and for good reason, Koyen said. “You can’t own it; you can’t trade it; you can’t sell it,” she said. “It was first introduced through the nursery trade. It’s a pretty plant – most invasives are.”

The winding vines of the black swallow-wort have tiny, purple-brown flowers whose shape and appearance are similar to many milkweed flowers – enough so that monarch butterflies lay eggs on them. But ultimately, these characteristics are a deadly lure.

“It has too much of the chemical that monarch butterfly caterpillars depend on,” Koyen said of cardiac glycosides, which make the caterpillar taste repulsive to predators. “Monarchs lay their eggs on the [black swallow-wort]; eggs hatch; the larvae start to eat the plant; and they end up poisoning themselves.”

Many beautiful and once-popular nonnative garden plants can spread and kill native wildflowers, too. These include well-known enemy invaders such as garlic mustard and purple loosestrife, as well as the  lesser known, but still aggressive armies of garden escapees such as snow-on-the-mountain, yellow archangel and others, Koyen said.

Coggin Heeringa – a Master Gardener, Wisconsin Master Naturalist and the naturalist at Crossroads at Big Creek in Sturgeon Bay – said that those who are concerned about monarchs’ welfare should not worry much about planting native milkweed, such as common milkweed and swamp milkweed. They should also plant more goldenrod, asters and other native late-summer and fall flowers for the monarchs that migrate south through Door County late in the year.

Criticism of No-Mow May

Heeringa did not express wholehearted support for No-Mow May: a conservation initiative that encourages people to stop mowing or mow less often during May to create habitat and provide resources for bees and other early-season pollinators. Although she’d support not mowing ditches in May or at other times of the year, mowing down dandelions in the lawn doesn’t bother her.

Honeybees go to dandelions for some nectar “if they’re the only game in town,” she said, but they mainly head to flowering trees for nectar and pollen at the same time that dandelions are blooming. She did say that dandelions attract some hummingbirds that feed on minute, flower-feeding insects called thrips.

DCIST leader Samantha Koyen said she continues to receive an encouraging landowner response to an effort to kill tall, invasive grasses called phragmites, and as of June 4, DCIST had permission forms to enter a total of 130 acres of phragmites-dominated private property in the county. Those who are interested in eliminating phragmites or have concerns about invasive species may contact Koyen at 920.746.2363 or [email protected]